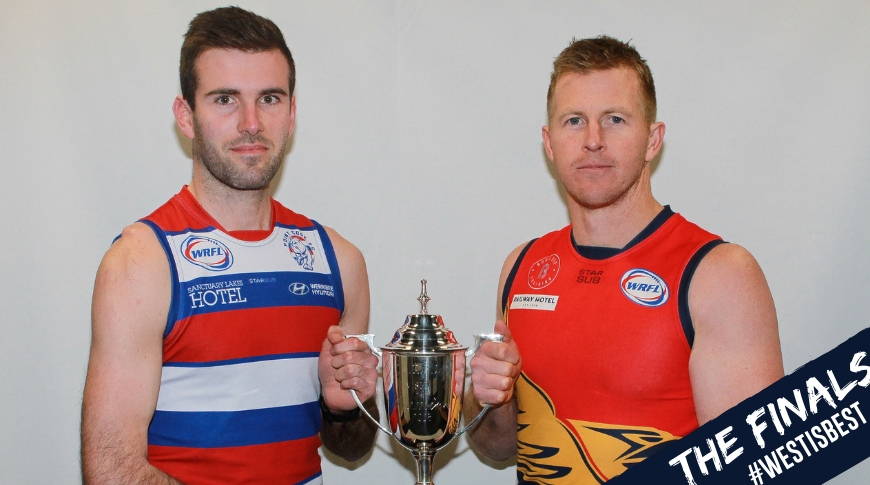 The Yarraville Seddon Eagles are hoping to cap off their perfect season with a premiership on Sunday as they take on Point Cook in the Division 2 Grand Final.

The Eagles have been unbeaten in 2018 and are the hot favourites to secure that elusive premiership.

This year will be the third straight season Yarraville Seddon will feature in the Grand Final, having lost the past two deciders to Caroline Springs and North Footscray.

Coach Vinnie Turcinovich said his aim this season was to empower his younger players to take the next step.

“Every season is a tough one, in one way or another so I’d be lying if I said it was how I anticipated the season to go,” he said.

“Being minor premiers is always a great achievement, but it doesn’t guarantee the ultimate goal in September; the premiership.

“We definitely had our fair share of injuries and the players with long term injuries unfortunately were Corey Salvador and Luke Simpson. We have a number of young players that have stepped up this season; Blake Green, Brandon Lester, Lachy Huell and Eddie Ford.”

Turcinovich said everyone at the club was feeling both excited and nervous ahead of Sunday’s match.

Finally, Turcinovich wanted to thank all of the clubs volunteers for their ongoing support in 2018.

“Good volunteers are very hard to come by however the culture at the club draws out good people to help,” he said.

“To all our volunteers and supporters I’d like to thank you all for the season and making it run as smoothly as possible.”

Point Cook’s inaugural year in the WRFL has been a success with both their Seniors and Reserves teams playing in Sunday’s respective Grand Finals.

The Bulldogs have made a big impact on the competition in their first season, proving they are more than up to the challenge.

Coach Ian Denny said having previously been involved with the WRFL, it was no great surprise the Division 2 competition was so even.

Denny said there was a great feeling of hope at the club after both senior teams reached the Grand Final.

“Until you reach the point there is almost a feeling of hope, however now that we are there it has become a feeling of expectation,” he said.

“With so many players becoming available at the pointy end it also becomes difficult for selection and heartache and excitement shares the same stage.

“The thrill I get out of it is more for the players and supporters who have put their heart and soul into the club.

“To be the first team to win a senior premiership for Point Cook will be historical and forever etched in their history so there is a piece there that drives a number of us.”

Denny wanted to thank all the Point Cook families for volunteering their time over the season.

“We have a number of family’s who dedicate their spare time to the club so to name a few it would be the Waughs, Archers, Havards, Goughs, Rouvrays; MacGibbons and the rest of the committee,” he said.

“I would also like to thank my coaches and trainers as they have been terrific throughout the year and fully supportive of our program.”

Point Cook Reserves coach Cameron McKenzie says there is a lot of nervous energy surrounding his team in the lead-up to Sunday’s Grand Final.

He said being nervous on the eve of the Grand Final was to be expected, but says the group is excited at the prospect of playing in the final game of the season.

“A Premiership would mean that all the hard work has paid off, both on and off the field and that the club is on the right path moving forward,” McKenzie said.

“As a coach you just want the players to succeed.

“Opportunities like this don’t come around too often. The club is ready to go.”

McKenzie said the 2018 season has been an enjoyable one.

“It was as tough as I thought it would be,” he said.

“We have played six players from the Under 19’s this season, which stands us in great shape for next year.

“Losing our leading goal kicker in Round 9 hurt us, but we have bounced back well.”

Finally, McKenzie wanted to thank the team behind the team. The volunteers, friends and families who support him and the players each week.

“We have the best people behind the scenes at this club and everybody knows we can’t do what we love doing without them,” he said.

“To all our Point Cook Football Club supporters, wear that red, white and blue with pride on Sunday and barrack hard.”

The Yarraville Seddon Eagles will be aiming to win their third straight Reserves flag on Sunday.

The Eagles will take on the Bulldogs at Avalon Airport Oval for the Premiership.

Coach Peter Lazzaro said winning the Premiership would mean so much to all those involved with the club.

“To win this year’s Premiership would mean an enormous amount to the club, the committee, the players and personally would be extremely satisfying, particularly with this group of home grown players, as they have been very committed to each other,” he said.

“The feeling around the club is great, having both seniors and reserves in the Grand Final again this year is very exciting and everyone involved at the club are really looking forward to Sunday.”

Lazzaro said this season has been more even than previous years and says it will be a great challenge for them to overcome Point Cook.

“We have had four very competitive games with them and we’re all definitely looking forward to the challenge of playing them in the Grand Final,” he said.

“We have an even spread of talented players, but a few guys who have had a consistent season are Scott Krakouer, Chris Topalidis, the Fry boys, big Kieran Ryan and Jack Collins.

“I’m sure we’ll have other boys who will bring a massive effort for the Grand Final.”

Lazzaro wanted to thank the people behind the scenes, who have helped the team in 2018.

“I would really like the opportunity to thank everyone behind the scenes, our President Neil Grieves, Ray O’Hara, Norm and Graham Lewis, Philipa Findlay, Jimmy Nikolovski and a huge thanks to our senior coach Vinnie Turcinovich,” he said.

“We have amazing supporters in particular Joan Grieves and Val Brennan and would also like to mention Doran McGregor and Greg Wray, to the players, Shane Williams has done a great job leading the players again this season and to all the players thanks so much taking everything on board, I appreciate all the support from everyone.”