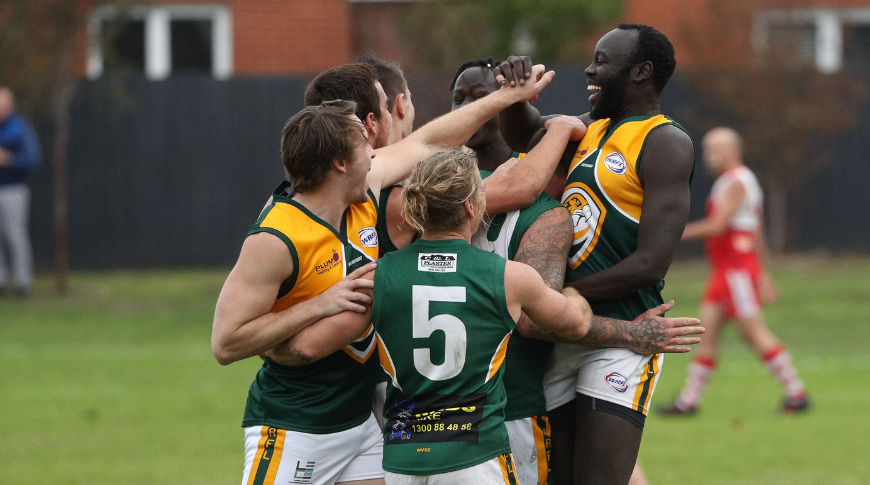 Wyndhamvale have earned a spot in the Division 2 Grand Final after its thrilling, come from behind five-point win against Parkside in the Preliminary Final on Saturday.

The Falcons battled through a ferocious opponent, strong winds and rain that turned the game into a slugfest.

The Magpies got the jump on the minor premiers with a two-goal to zero opening term, adjusting to the poor conditions quickly and taking advantage when forward.

Parkside held firm in the second despite the rain easing off but couldn’t convert forward-50 entries into scores which proved costly. The Falcons added their first major in the quarter but went into the half down by 12 points.

The restart saw both teams struggle to find the goals as much of the game was played in repetitive fashion; defend the long ball, move the ball out of the back 50 and go again.

Wyndhamvale applied most of the pressure however and were duly rewarded with the first goal of the term, but before long the Magpies had answered thanks to a set shot from Jesse McLellan that pushed the lead back to 11 points.

Jack Tessari wasn’t about to go quietly as he goaled and brought the deficit back to just five thanks to a great running snap that saw both teams combine for three goals in three minutes.

The less-fancied Magpies led by just four points at the three-quarter time break as the Falcons had all the momentum heading into the fourth.

Kicking with the wind in the final term, Wyndhamvale got the dream start with a goal five minutes into the quarter to take a slender two-point lead.

Parkside’s Brent Kelly answered with a beautiful piece of individual play that saw him rove a contest at the top of the goal square and snap truly to give his side the lead once again.

The contest was ferocious and several behinds tied the scores up before a rushed behind gave the Falcons a one-point buffer with minutes to play.

The win was sealed shortly after as the Falcons goaled and held on for the season-defining 5.12. (42) to 5.5. (35) win that saw Jordan Montalto voted best-on for Wyndhamvale.

The seven-point win sets up what should be a cracking game in the Grand Final between the competition’s two best teams.

Yarraville-Seddon will enter as favourites but given Wyndhamvale’s extraordinary season they will be a strong chance to end the season as premiers.