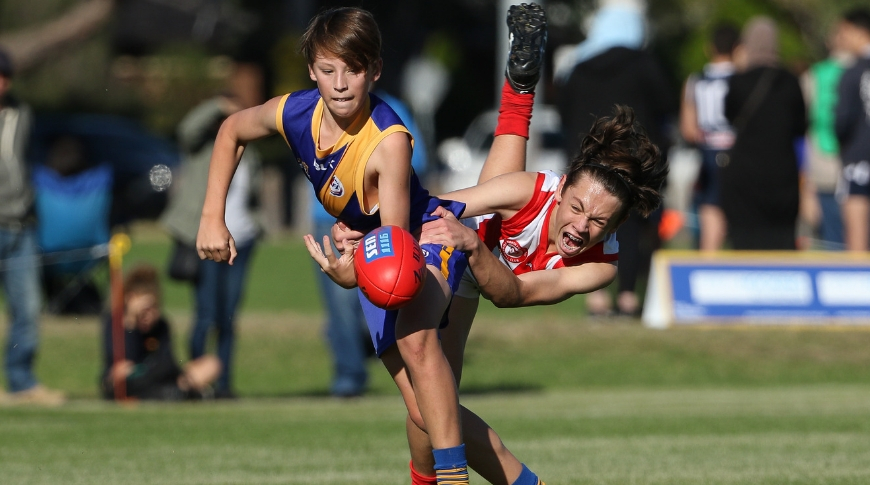 The WRFL has received seven nominations at the 2018 AFL Victoria Community Media Awards.

Darrell Jones from Local Legends Photography was nominated three times. His image above (Ball) was among the Best Photograph Action category. His two other images for Character of the Game are below (The Final Siren and Surprise). The WRFL Match of the Day coverage was also nominated. The team of, Peppe Cavalieri, Andrew Wilson Gary Turner, and Cade Lucas begin broadcasting on 88.9 WYN FM at 1.30pm each Saturday. The crew preview the Match of the Day, talk likely match-ups and speak with both coaches ahead of the match.

They give detailed quarter by quarter analysis of the game as well as a live play-by-play call of the game, giving listeners a comprehensive match day coverage of WRFL Senior football across all three divisions.

Kids Chat and the Inner Sanctum series were also nominated in the Best Use of Online Media – TV Show category.

Eighteen teams across the WRFL’s Senior Clubs took over the WRFL account for one night during the season, giving followers a taste of what goes on at their club.

Junior and Senior Grand Final Days, Junior Metro Championships, Senior Interleague matches and Presentation evenings were all covered on Instagram Stories, as well as themed rounds like Sockit2MND and EJ Whitten Foundation. All of which can be viewed as Highlights on the WRFL Instagram Account.

The shortlisted nominees will now have their submissions evaluated by a judging panel consisting of experts in the relevant field before a winner in each category is announced at a luncheon at Ikon Park on Friday, December 7.