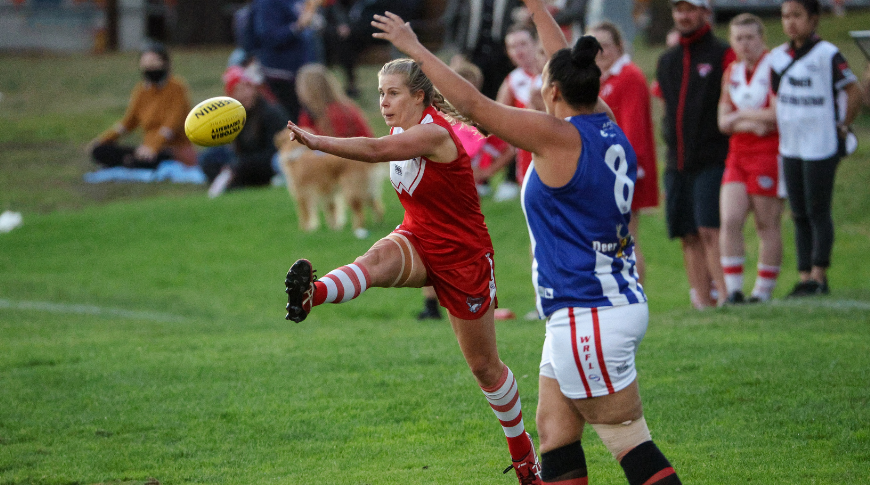 Fresh off the back of the Easter break, the teams of the VU Polytechnic Senior Women’s Competition returned for Round 2, marking the ANZAC weekend with some exciting footy.

Friday night saw Division 1 rivals Spotswood and Werribee Centrals engaged in an arm wrestle under lights at Converse Oval — with the home side clinching a two-point win in the dying stages of the game. Larissa Renaut was dangerous in front of goals for the Centurions, kicking four, whilst Tamsyn Kirk starred in her first outing in 2022 for the Wolves.

Caroline Springs hosted Yarraville Seddon out at Taylors Run oval on Saturday morning, executing a dominant win over the new Division 1 side. Jacqueline McClurg stood strong for the Eagles, and Jacinta Kondis and Caitlin Pretty each bagged four goals for the Lakers in their 73-point victory.

To round out the Division 1 competition, Manor Lakes ran over Hoppers Crossing, claiming a 71-point win. The Storm forward line shared the load, with 8 individual goal kickers hitting the scoreboard.

The Division 2 competition kicked off Friday night, with Caroline Springs registering a comprehensive win over visitors Laverton. Youngster Mackenzie Campey kicked a bag for the Lakers Reserves side — with a huge seven goals; whilst Magan Ristic-Keena was rewarded for effort and named amongst the best for the Magpies.

Saturday evening saw West Footscray host Braybrook/Albanvale at Shorten Reserve, with the Roosters claiming their second win on the trot. New recruit Baileigh Skinner was dangerous on the wing for the home side, and Sarah Jamieson hit the scoreboard for both of Braybrook/Albanvale’s goals.

At Wyndhamvale South Oval on Sunday, the Falcons held the Road Runners scoreless, locking in a 70-point win. North Sunshine players Tashania Knapp Sirengo and Noelle Burden were strong under pressure, whilst Madeline Yung kicked five goals and was named in best for the home side.

The long weekend was rounded out with the featured women’s ANZAC day game — pitting Point Cook Centrals against Point Cook for suburban bragging rights. The Sharks hosted their cross-town rivals at Featherbrook Reserve, marking the occasion with the traditional Last Post and a minute’s silence prior to the opening siren.

The home side meant business from the first ball up, bringing their trademark intensity and pressure, and locking the ball inside their scoring 50 for much of the game.

The dominant display saw the Sharks register a huge 105-point victory by the final siren — with Jen Plumb, Mandy Seath and Sharnie Currie all firing multiples in the forward line, and Emily Evans playing a vital role across the ground. 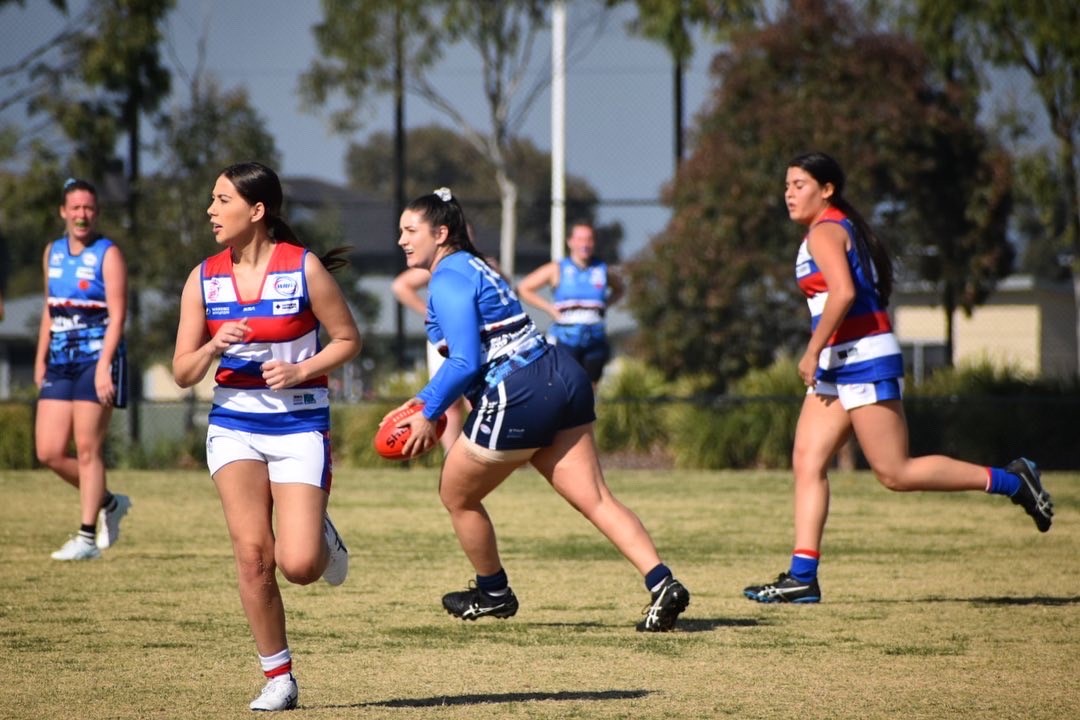 The Bulldogs surprised the Sharks at the start of the fourth quarter, winning centre clearances and finally opening their scoring account thanks to the boot of Erin Robinson, but the surge was quickly shut down by a slick Sharks backline.

At the conclusion of the game, Maddie Johnson (Sharks) and Chantelle Jacobsen-Auld (Bulldogs) were awarded Best on Ground Medals for their respective sides.