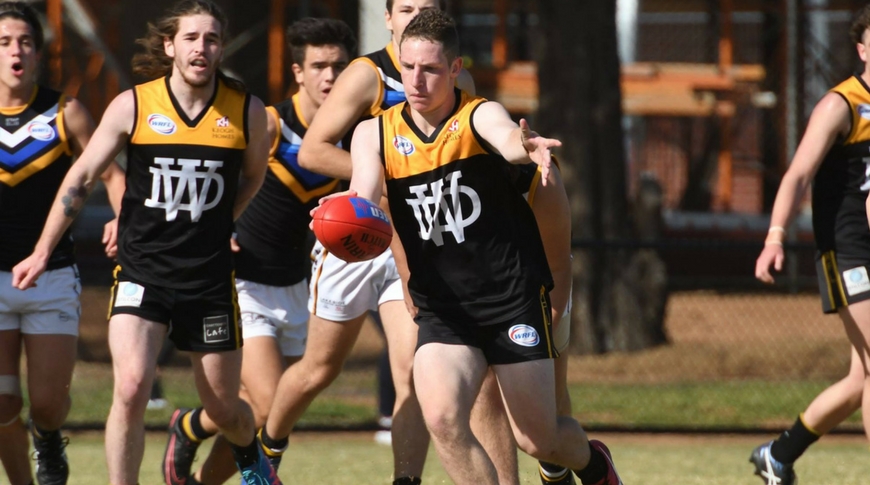 WERRIBEE EDGES OUT LAKERS IN THRILLER

Round 4 of the Western Region Football League TIV Under 19 Competition brought out more thrills and spills, as Werribee Districts edged out Caroline Springs by four points to claim their third win of the season.

In what may be the game of the season so far, both sides traded blows back and forth throughout the contest. However, the Lakers seemed to be in the box seat at three-quarter time, with a 20-point lead. But there were more surprises, as a dominant last quarter display from the Districts in which they had 10 scoring shots, allowed them to narrowly run over the top of the Lakers.

Darcy Phillips outlined his importance to his side with best-on-ground display. He was complemented by the work of Connor Mcintosh and Braydon Poole, who continued his strong early-season form.

For the Lakers, Will Markovski dominated up forward all day, with four majors. Mitchell Psalia also was a constant threat throughout the game, and was able to chip in with three majors.

The clash was evenly poised at the main break, as the Warriors only held a narrow two-point lead. However, an eight goal to one second half meant that the game comfortably resulted in a Hoppers Crossing victory.

Ahmed Haddara continued his strong early season form with four goals, while Lachlan Grant underlined his importance to his side with another strong around the ground display.  For Spotswood, Stephen Syme battled hard all day up forward, with two goals.

Altona powered to its second win of the year, with a 13.20. (98) to 1.2. (8)  victory over Newport.  The Vikings controlled the game from the opening bounce, which was emphasised as they registered 33 scoring shots to three.

To Newport’s relief, inaccurate kicking prevented the margin from getting even worse.

Brody Searle starred for the Vikings, as he constantly found the footy and kicked two goals. Daniel Pantalleresco also was handy up forward, with three major scores.

Point Cook had the bye, and will look to obtain its first win of their 2018 campaign next weekend.