Home › Senior › WARRIORS WIN IN ROUND 1 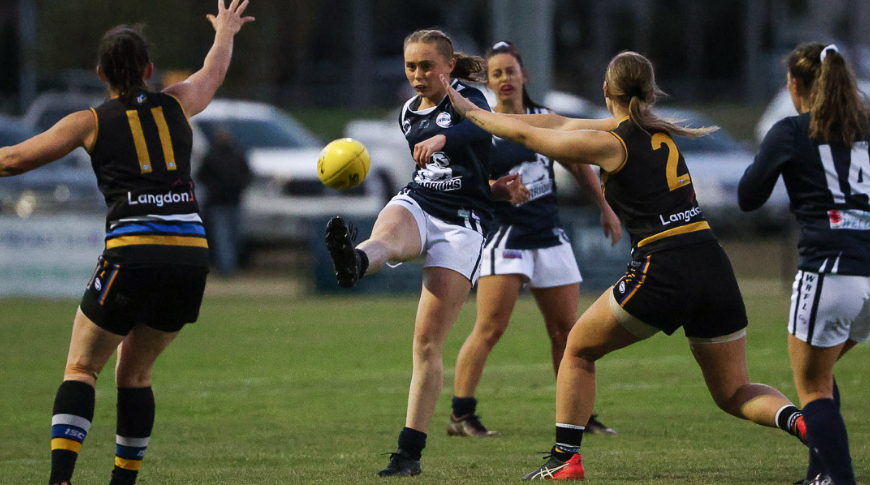 WARRIORS WIN IN ROUND 1

After more than 570 days without footy, Round 1 of the VU Polytechnic Senior Women’s competition kicked off on Saturday night in Caroline Springs. New faces and old foes came together, as the Lakers took on the veritable “New Kids on the Block”, Hoppers Crossing, opening the 2021 WRFL Season with a wet weather slugfest.

The evening brought with it some very Melbourne-esque weather — dealing out everything from biting cross-oval winds to ice-cold rain, with some very brief moments of sun in between. Even a rainbow was thrown into the mix, providing a fitting backdrop to the Lakers’ clubrooms, and to the season to come, especially welcome after a year without footy.

Caroline Springs finished their 2019 campaign as the competition’s runners-up, falling just short against Spotswood in a thrilling finals performance. Saturday’s season opener saw them line up against a few familiar faces from that Grand Final tilt, albeit in a new team for Hoppers Crossing. Hoppers, having had a false start in last year’s non-season were equally keen to get stuck in — their intensity reverberating from the opening siren.

The first centre bounce saw Hoppers Crossing ruck Sarah Truman match up against Molly Young from Caroline Springs, with the two players setting the bar for a physical first term. After increasing forward pressure pushed the ball into their forward 50, Hoppers’ player Paris Rafferty opened the team’s scoring account, with a clever toe punt over the goal line.

A brief but icy shower during the quarter made for difficult conditions and a slippery ball; and some heavy congestion on the eastern boundary. The Lakers repeated efforts to surge forward saw the play open up, and with 7 minutes remaining on the clock, Alex O’Shea was rewarded for effort, kicking a goal for Caroline Springs. At the break, the scores were locked at 1.1-7 a piece.

Coming back from the huddle, buoyed by a return of the sun and their coach’s quarter time message, Caroline Springs continued to build on the momentum of their first term — keeping the ball locked in their forward 50 for the first 10 mins of the quarter. The absence of rain saw a clean mark from Laker’s player Carissa Whiley and allowed the team to control the possession along the boundary with some excellent kick-and-mark style play.

The tide turned in the back end of the quarter however, with notable bursts of speed and clean hands from Hoppers’ player Tylah Hohapata, pushing the play down to the opposite end of the oval. Despite some courageous defence from the Caroline Springs backline, the Warriors peppered the goal with scoring opportunities, finally getting reward for effort 30 seconds before the half-time siren, thanks to the boot of Emma Ludolff.

After a welcome half-time hiatus from the elements, the teams returned to the oval, only for a heavy downpour to again interrupt the flow of play. The wet conditions meant a fairly even third term for both sides — hard-bodied tackles revealing the ferocity of the competition, with Lakers’ ruck Molly Young showing some particularly strong bodywork at the stoppages. At the close of the quarter just 3 behinds had been kicked, the score 1.6-10 to 2.4-16 in favour of the Hoppers Crossing women.

As the rain eased, Hoppers Crossing piled on the pressure for a late surge — just 40 seconds into the final quarter, Gilda Incigneri took a chance with a quick snap in front — widening the Warriors lead to 2 goals. Notwithstanding some impressive ball movement from Caroline Springs’ players Kelsey Hildred and Alana Ellis, the Lakers could only muster 2 behinds, and were forced back into their defensive 50 for most of the quarter.

Whilst the wet conditions may have denied a dominant Hoppers Crossing some of their final term scoring opportunities, the Warriors were ultimately able to lock in and convert an 11-point lead into a win for Round 1.