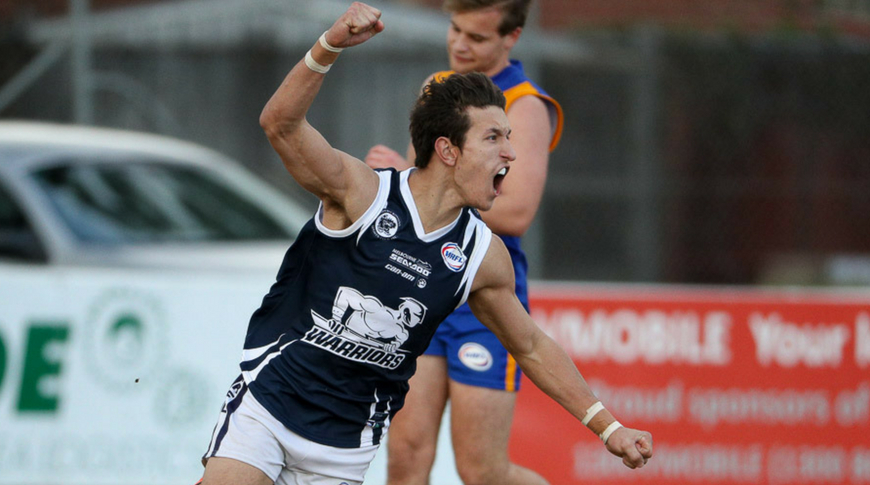 Every game is important as we hit the home stretch of the home and away season.

The evenness of the competition was highlighted on the weekend, when Hoppers Crossing turned the tables on Deer Park, scoring an important 10 point win over the reigning premiers.

The win was the Warriors first over the Lions at John McLeod Oval since 2001.

It is also the first time Deer Park has lost more than two matches during the home and away season since 2012.

Hoppers Crossing star Daniel Strnak kicked four goals in the win, he also kicked the sealer in the final minutes of the matches.

Chris Stewart booted five goals for Deer Park in the loss, pushing his total to 14 majors in his past three games. He almost single-handedly got the Lions back in it, but it wasn’t enough.

The Warriors will next host Caroline Springs and will be in contention to claim top spot by the end of Round 12, should results fall their way.

Altona was a class above Spotswood on Saturday, defeating the Woodsman by 70-points at Dreamstreet Lending Oval, breaking their two game losing streak.

The win was set up in the second and third quarters where the Vikings outscored Spotswood 13 goals to two, dominating in all facets of the game.

The home side won the last quarter, but the damage was well and truly done.

Altona had 31 scoring shots to 16 and that was without goal kicking spearhead Patrick Rose, who missed the game.

Sunshine face Altona in Round 12 while Spotswood will look to bounce back against Deer Park.

Albion was unlucky not to score a victory in Round 11. They threw everything at the Werribee Districts, but unfortunately couldn’t play out four quarters, losing by 13-points.

Will Sullivan was again important for the Tigers, while Nathan Black kicked three goals and Cam Lee booted two.

Kym Taylor was best on ground for the Cats, he kicked three goals.

The win put the Tigers back into top spot on the Division 1 ladder, the win was their first since Round 7.

Albion’s finals chances are all but over following the loss but can earn their fourth win of 2018 against Wyndhamvale on Saturday. While Werribee Districts host St Albans.

Sunshine’s 114-point win over Wyndhamvale keeps the Kangaroos in touch with the top five.

Lachlan Smart kicked seven goals in the win. He was best on ground, while Ben Dessent continued to impress.

The Lakers led at each break and held the Saints goalless in the second quarter, running out 15-point winners.