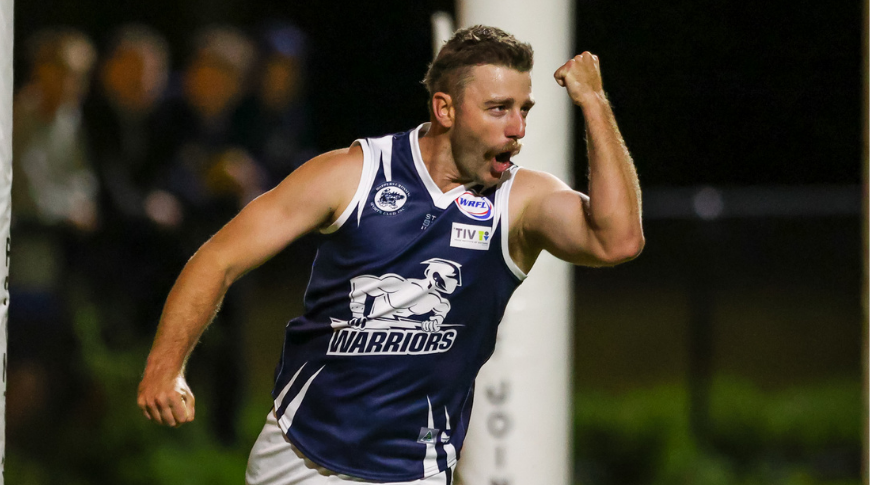 WARRIORS COME FROM BEHIND, SPOTSWOOD WINLESS

In wet and wild conditions at Hogans Road Oval, Hoppers Crossing were able to stage a famous come from behind win, with a five-point victory over Werribee Districts.

After the Tigers looked to take advantage of the dry conditions through the likes of Josh Mould and Dillon Viojo-Rainbow, the Warriors began to fight back in the heavy downpours of the second term. With the tempo slowed down, Jack Dorgan and Sam Clifford were instrumental in turning things around for the home side.

The second half saw both sides exchange spurts of brilliance, with Brenton Payne and Trent Lee exchanging majors for Hoppers Crossing and Werribee Districts respectively.

Ultimately, the Warriors’ superior work around the contest led to them peppering the goals, before Nathan Williams struck truly to give the home side their first lead since the opening term.

While the Tigers continued to fight, a third major for Payne wrapped up a famous win for the Warriors. Hoppers Crossing will be hoping to carry their momentum into next weekend’s clash with Sunshine, while Werribee Districts have a chance to bounce back against a reeling Spotswood.

The Woodsmen were unable to register their first win of 2021, going down to Altona by 58-points in a marquee Saturday evening ANZAC eve clash. The Vikings opened with a 3.10 first quarter and kept Spotswood goalless for the entire contest in a dominant performance.

It was the first time since 1947, Spotswood were kept goalless in a match.

Spencer Johnson and Will Taylor were excellent for the unbeaten Vikings, while Jack Irvine battled hard for the winless Woodsmen.

Next week, the Vikings will take on Deer Park in a rematch of the 2019 Division 1 Grand Final, where Altona will be eager to atone for that loss. The Lions continue to tick along in 2021, with a strong 67-point win over Yarraville Seddon. Ex-Richmond Tiger Todd Elton and Billy Cannolo both booted five goals in the win, while Luke Scicchitano continued his strong form across half-back. For the Eagles, Riley Anderson and James Edmonds performed well despite the loss.

Next weekend, Yarraville Seddon will hope they can recapture their Round 1 form against St Albans, who defeated Caroline Springs in a thrilling five-point win. In a close encounter all afternoon, the Saints were just able to hang on through the likes of Majok Ngong and Adem Asani.

Caroline Springs will have to quickly regroup, as they face a Point Cook side fresh off a 31-point win over Sunshine – their first win since the 20th of July 2019. After falling behind by 15 points qt quarter-time, the Bulldogs took over, pouring on 11 goals to one for the remainder of the contest. Marcus Groves and Tyler Kolyniuk starred for Point Cook.