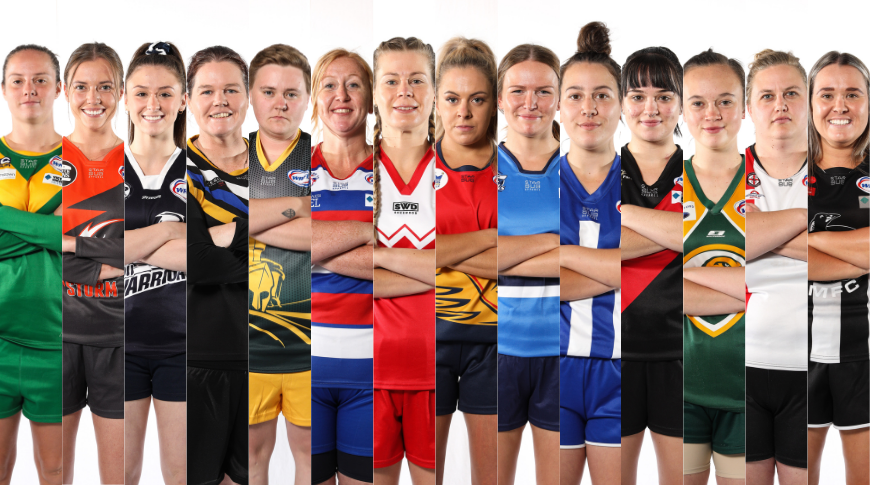 We’ve seen some big scores, wet weather slugfests, tough battles between competition rivals, and some absolutely standout performances. Not even a pandemic break can stop the fierce footballing women of the West!

Teams are listed in order of the full competition ladder at the conclusion of Round 10.

There has been a “changing of the guard” this season down at Converse Oval, with many of Spotswood’s 2019 Under 18 flag winners graduating to senior footy — and further cementing their strength as the competition leaders. Taking the reigns as captain in 2021, Catlin Brennan and her golden boot have bagged a competition-leading 26 goals for the Wolves so far. Peggy Toutziarakis has been similarly impactful, kicking 13 goals; whilst former Spurs/Bulldogs VFLW player Kerrie Clarke hasn’t been shy about bringing her wealth of footy experience to the young side.

Manor Lakes has always been a consistent workhorse of the competition, and this season suggests no different. Despite the year off footy, the Storm women have locked-in seven wins, only going down to competition leaders Spotswood. 2019 WRFL Team of the Year halfback Lindsay Newton continues to impress, registering in best for all but one game played so far. In similar form, young gun Alysha Bettels (Club Best & Fairest 2019) has been consistently competitive on the ball, whilst tall Lauren Clymo has been an absolute force up front, bagging 25 goals for her side.

After missing out on their inaugural season in 2020, the newly minted Hoppers Crossing outfit have hit the ground running in 2021. The Warriors have claimed their spot at third on the competition ladder with six definitive wins, and head into the second-half of the season as a strong final’s contender. Captain Kayla Koropeckyj has led from the front, hitting the scoreboard for 10 individual goals, while Jorgia Le Redmond (12 goals) and Olivia Burrow (11 goals) have also proven dangerous in their scoring 50.

2021 has seen some new faces join the Caroline Springs side, and the group has done well to continue to build after a year out of the game. Rounding out the top four with a strong case for finals, the Lakers have seen solid performances from all-rounders Kyah Tessari and Kelsey Hildred, with the later particularly explosive out of the middle. Caitlin Pretty has been a sure bet up front, piling on the points for her side with 14 individual goals.

Out to prove they are a top side in the competition, Werribee Centrals’ run-and-carry has them well placed to match it with the top 4. Larrisa Renaut continues her good form as reigning Best and Fairest for the club, kicking 12 majors so far. Young guns Keely Spiteri and Sarah Tabone have registered consistent performances for the Centurions, with both players polling in best in four games.

Building on their inaugural season in 2019, the Doggies have landed in sixth place on the competition ladder after registering four wins to date. The team have added a few former Tarniet players to their roster and are focused on bringing the pressure to all their contests. Kristen McKinnis and Verity Cox have been strong for the Point Cook side, each bagging two goals, with the latter registering five best performances. Quick-footed Sammie Nguyen has threatened in space, her speed on the ground a real asset to the side.

The Roosters have refreshed their roster with a host of new faces and are building something special, despite grappling with injuries after a season out of the game. Country footy import Britt Gray has proven to be a great recruit, reinforcing the dangerous Roosters midfield alongside speedster Claire Cashman — each registering in best on multiple occasions. Goal sneak Katherine Belcher is having a great season up front, kicking seven goals for the West Footscray side so far.

Arguably hard done by a tough fixture, the Eagles have shown they can take it up to the top, nearly rolling the competition leaders Spotswood in a nail-biter in Round 6. Chloe Lazzaro has been dominant both up front and in the ruck for Yarraville Seddon, kicking three goals and being named in best six times. Ann-Marie Geary and Alana Taylor have also registered strong showings across the season, each kicking 7 majors and regularly featuring in best.

Point Cook Centrals are a consistently competitive side, and despite having to rebuild in the off-season, have frustrated even the most skilled side with their intense stoppage pressure. Leah Moss and Maddie Johnson have each had huge seasons to date, with Moss dangerous out of the middle, and Johnson hitting the scoreboard eight times. Vice-Captain Hannah Duff has been a reliable fixture in the Sharks backline, standing strong for her side and earning time in best on two occasions.

Thanks to a late preseason merger, the women of Braybrook/Albanvale were able to field a team in 2021. The playing group have done well to register some wins with minimal preparation together. Tiana Jackson has held her own in defence and kept the backline accountable; and Caitlyn Crameri and Rhys Carter-Coleman have consistently performed for their side.

The Road Runners have been refocusing over the preseason, with the side keen to build on their hard style of footy. Captain Jess Mudie continues to lead her team by example. Shanae Skye Murray and Renee Bonnici have each registered some best performances for their side; with the latter putting on some great defensive bodywork in the North Sunshine backline.

Set for a big year with some new faces, Wyndhamvale suffered some unfortunate early outs due to injury. Despite struggling for numbers, the Falcons side have taken the game on, with strong utility Chloe Muus instrumental across the ground. Poppy Poppelwell and Rachael Sherriff have threatened in the centre, with the former proving very dangerous in space on the wing.

Laverton have had a hard season so far, with many previous players moving on during the year off. Despite some tough losses, the Magpies have focused their season into a rebuild and are cultivating a strong culture on and off the field. Abbey Browne stands tall as captain, rebounding ferociously out of defence, whilst Kira Firth offers a safe pair of hands on the goal line. Alice Vanstone has also been in the best three times.