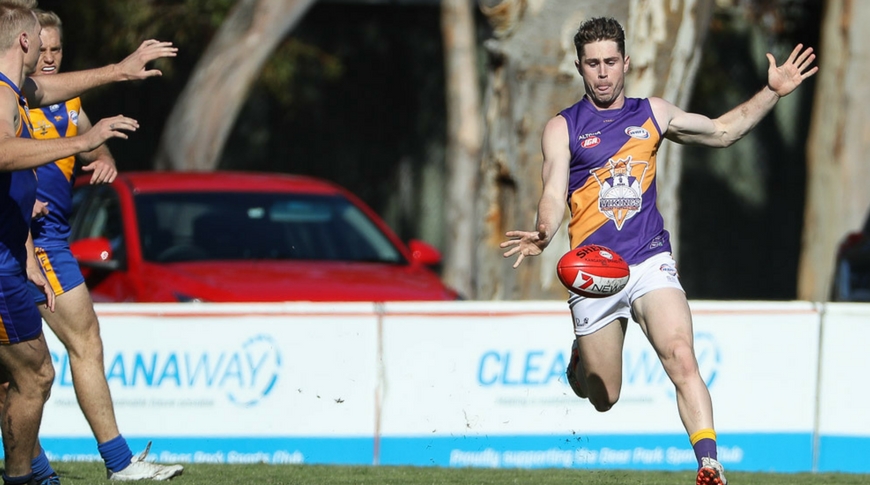 Patrick Rose set shot with less than 60 seconds remaining helped Altona snatch victory from the jaws of defeat after giving up a four-goal lead with minutes to go.

Altona had led for the majority of the match up as Spotswood had booted just three goals through the first three quarters, but the Woodsmen weren’t going down easily.

Four majors in the final term looked to have given the Woodsmen the unlucky away victory, but Rose’s mark and goal from a kick off the deck put the Vikings over the top, 8.8. (56) to 7.13. (55).

The win was Altona first over Spotswood at JK Grant Reserve since, Round 1 2013.

Altona will look to make it three wins on the trot when they battle Sunshine in Round 3, while Spotswood will aim for its first four premiership points this season against reigning premiers Deer Park.

Thirteen goals to two in the first and third quarters combined helped Deer Park cruise to a 28-point victory against Hoppers Crossing.

The quick start by the home side meant the Warriors were behind from the jump as the Lions played the game on their terms with such a big lead.

The win puts Deer Park into fourth spot on the ladder, Hoppers Crossing falling to seventh ahead of its clash with Caroline Springs this week.

Jason Cooke’s three majors helped St Albans score victory over a desperate Caroline Springs to record its first win of the season, 11.8. (74) to 9.6. (60).

The Saints defence held the Lakers to just a single major in the fourth quarter to seal the 14-point win.

St. Albans faces the Werribee Districts in Round 3.

The margin could have been bigger, if it they were accurate in-front of goal. Sunshine had 33 shots on goal to 10.

The bottom placed Falcons will look to bounce back when they travel to Albion this week.

Christopher Molivas’ six majors were a competition high in Round 2, he led his Werribee Districts side to a 73-point thrashing of Albion.