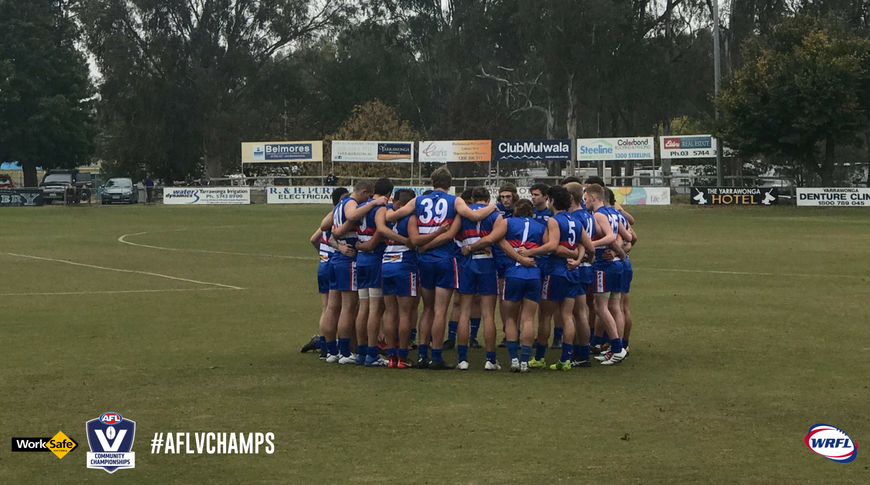 According to coach Matt Dean, who has been involved as coach for all three wins, Saturday’s victory in Yarrawonga was the toughest and the most pleasing result.

“It was a really good effort by the players,” he said.

“It was a big ask for them to come to Yarrawonga and play. It is a 10-hour turnaround to come up the highway and play and go back home, so it is a good commitment from them.

“From the three wins that I have been involved with, this was our toughest test so it was good to get the result.”

The WRFL team had a nine-point advantage at the first break, but it was the second quarter were the team really lifted, scoring five goals to two.

“The second quarter was huge we got a bit of a gap between us and them,” Dean said.

“For those that were watching they were a very tall and fit side. We just wanted to keep it basic in terms of giving them no space and across the ground going man on man which the players did, we probably frustrated them in the end and we forced them to kick down the line and make those mistakes.

“When it was out turn we took the game on and it was good.”

It was an even third term, before Ovens and Murray mounted a spirited fight back in the final term, however it was too little too late.

Josh Mould from the Wyndhamvale Football Club was awarded the best on ground medal.

“Everyone did their bit, but Josh Mould is at Werribee VFL for a reason and he showed that during the game. That’s what you want when those type of players come and play,” Dean said.

“Lachie Goodland was good, he rucked all day, one out and didn’t come to the bench for a rest. He was enormous,” he said.

“We weren’t tall, there was probably eight players who were taller than him playing so for him to ruck all game that was a massive effort.”

“He is an exciting forward. He knows where the goals are, hits the pack hard and takes a good grab.”