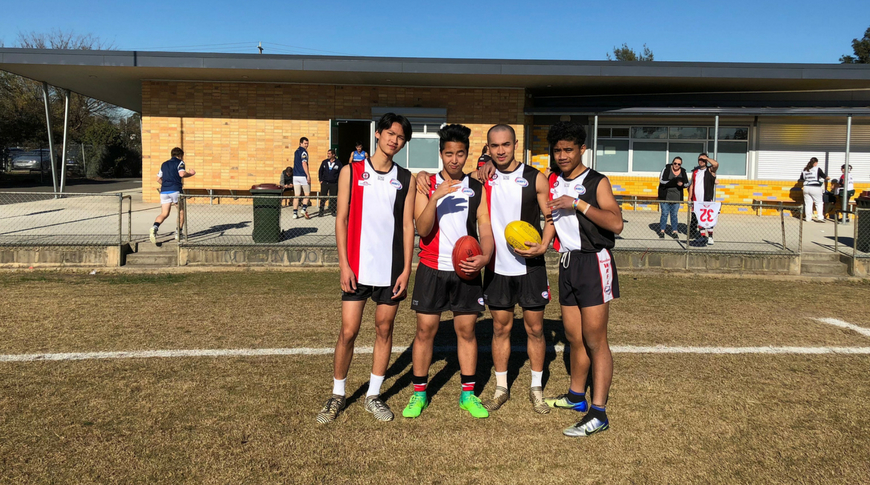 Three Vietnamese rookies, who before this year have never picked up a footy, have been making a big impact at the North Sunshine Football Club this season, both on and off the field.

Ethan Nguyen, Eric Dao and Don Tran were involved in the Western Bulldogs Leaders of the West team, which competed at the Towards Zero Unity Cup earlier this season.

The tournament was created in 2008 by AFL Victoria in conjunction with the Australian Federal Police, in aiming to break down multicultural barriers while learning the game of Aussie Rules.

The trio have since transitioned into playing local football in the WRFL with the Roadrunners.

The club has had an awful run of injury and player availability throughout the 2018 home and away season, with more than 30 players suffering bone breaks or fractures.

Due to the large amount of injuries North Sunshine has faced, coach Brett Kennerley was forced to look elsewhere for players.

“We earmarked pretty early there were a few programs around the community where we’d be able to bring players from a completely different space, just to give them an opportunity at club footy,” he said.

After understanding that over a quarter of the Sunshine demographic was of a Vietnamese background, Kennerley decided to contact AFL Victoria Game Development Officer Quang Huynh, who had worked with the diverse community for the past two years.

Through Quang, Ethan, Eric and Don were given the opportunity to transition to North Sunshine and have the chance to enhance their knowledge of the game in a thriving club environment.

Since being involved in the Unity Cup, the trio have fallen in love with the game. So when they were offered the chance to join the Roadrunners, they jumped at it. The trio had only ever played AFL 9’s rules before, which meant they were not used to being tackled.

Ethan said he was overwhelmed at the prospect of being tackled, but has since embraced the competitiveness of the game.

“People were tackling me, and I was thinking ‘what are you doing?’ I was panicking when I got tackled but I got used to it,” he said.

North Sunshine veteran Hung Phan put the trio under his wing, when they arrived to the club.

Phan has been involved with the Roadrunners for the past 30 years and has always supported and welcomed new players into the club.

“The first time I introduced the boys to Hung and said they’re coming to join the team, he almost cried. It’s given him this new passion for the game, being able to help these boys,” Quang said.

Quang and Hung both said they see a little bit of themselves in Eric, Ethan and Don. They say it is great to see young Vietnamese people given more opportunities to play footy and feel included.

Quang said when he was younger he used to sneak out and play football because his parents weren’t as enthusiastic about him playing.

He said the boys now had a chance to break down barriers and get their parents involved with the football community.

“I took the boys to eat at a local Bánh Mì shop after the match last week, and the Vietnamese lady who owned the shop asked if the boys play football,” Quang said.

“When they said yes, she was so shocked and didn’t even know they could play the game.

“If the Vietnamese community starts to be more aware of the boys, they’re going to come and support; they want to watch some of their own.”

To help create a more welcoming environment at Dempster Park, coach Kennerley said the club had introduced rice paper rolls and Vietnamese coffee in the canteen.

“Little things like that can change the cultural bias, and helps to reach out to that community, so they can feel a little more at home watching the game,” he said.

While on-field results haven’t gone North Sunshine’s way for most of 2018, the infusion of the passionate and enthusiastic boys has changed the playing group’s spirits.

“Very early, it was evident that it (success) wasn’t going to come, the bottom lip starts to drag a bit, and then you get these guys coming in; it really is a breath of fresh air,” Kennerley said.

Not only given opportunities on the field, North Sunshine has been able to give 24-year-old Don an employment opportunity, which has further helped his English skills and made him feel more comfortable living in Melbourne.

Improving these skills have been an important benefit of the boys’ time in the Unity Cup and playing for North Sunshine, with their ability to make an impact stretching further than the field on a Saturday afternoon.

Kennerley understands the need to impact the younger kids from multicultural backgrounds, explaining that when the 7 to 9-year old’s come through, they can assimilate having seen these boys play, and learn from someone who’s not from an Australian background.

“If we’ve got a guy who can play and come back to help these younger kids, that’s for the betterment of the club’s long-term future,” he said.

Quang concurs, saying the boys will have a large say in impacting the Vietnamese community’s perception of football and hopes that their on-field exploits will help to inspire the next generation.

“Who knows, they might even be able to play AFL, then the next kids will want to be like Eric, Ethan and Don, and then the cycle will continue,” he said.

Even the Viet Times local newspaper in Melbourne has shown an interest in the boys’ exploits. It’s clear their impact has already begun.

The boys themselves are all keen to keep playing for North Sunshine, as Eric and Ethan work to join Don in the senior team.