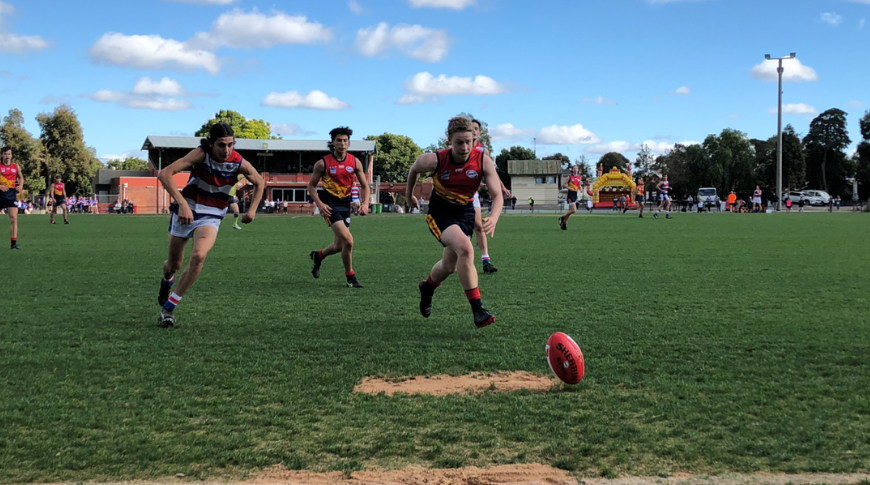 Point Cook have outshone a valiant Yarraville Seddon Eagles outfit, claiming a 41-point victory at Yarraville Oval in the Under 18 Division 1 competition.

It was a stalemate early, with the visitors looking dangerous in transition. James Mcvey was a handful, slotting two opening term goals.

However, the Eagles backline held in tough, only trailing by two majors at the first break.

At quarter time, Point Cook coach Paul Butler implored his players to continually drive the football off half-back, as this was their most threatening method of ball movement.

His players responded, owning territory in the second quarter through a centre clearance dominance.

Trailing by 22-points at half-time, the Eagles came out firing in the third term, kicking five goals to one to claim a slim one-point lead at three quarter time.

Callum Hobson was fantastic, as he booted three goals in the third term.

But the charge was off the back of Oscar Siddell and Sebastian Turnbull, who both found plenty of the football and were involved in a lot of scoring plays.

However, an upset wasn’t on the cards for the winless Eagles. The Bulldogs regrouped and dominated the last quarter, holding Yarraville scoreless.

Jim Botsaris was superb for Point Cook, with his aggression and pace on show throughout the day.

This win sets Point Cook up for a massive clash against fellow undefeated side Werribee Districts, who proved too strong for Altona in a 20-point win.

The Vikings will be looking to recapture their winning formula against a strong Caroline Springs outfit, who claimed an emphatic 85-point victory over Spotswood.

The Warriors took care of the Sharks, as Isaac Cohen and Bailey Moffatt slotted four apiece in their 82-point win.

Spotswood will be on the hunt for their first win against Point Cook Centrals next week, while the Eagles will be eager to replicate their third quarter performance from the weekend for the entire game against Hoppers Crossing.