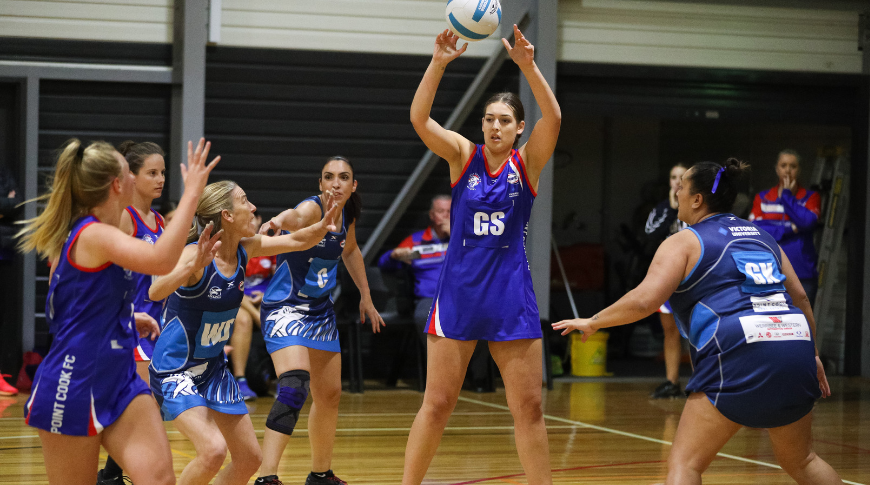 The two talented teams met back in Round 1, with the Sharks surprising the Bulldogs, winning by 18 goals.

Point Cook Centrals 1 has been unbeatable since, not losing a game after nine rounds and sitting comfortably in top spot.

Point Cook Blue haven’t had it so easy in season two, losing two games, the second loss was at the hands of Braybrook Whitten in Round 3.

Both teams are the most attacking in the competition, the Sharks are led by Rebecca Hicks, who has had a standout season in the goal ring, while last year’s Best and Fairest winner Jenna Goricanec is always on target.

The winner of the match will undoubtedly earn the premiership favourite tag with five games remaining.

Spotswood Gold won its fifth straight match in Round 9, defeating Sunshine 1, who has lost its past two games.

A strong first half was the catalyst for Spotswood’s win, scoring 21 goals to 10.

After coming off the bench in the first quarter, Andrea Tai scored 28 goals and was among the best on court for Braybrook.

In Division 2, ladder-leaders Spotswood Green had an 11-goal victory over Manor Lakes.

In the closest game of the round, Sunshine 2 came from behind at three quarter time to defeat Braybrook Hawkins.

Amy Morgan and Sheridan Ness played well for the Kangaroos.