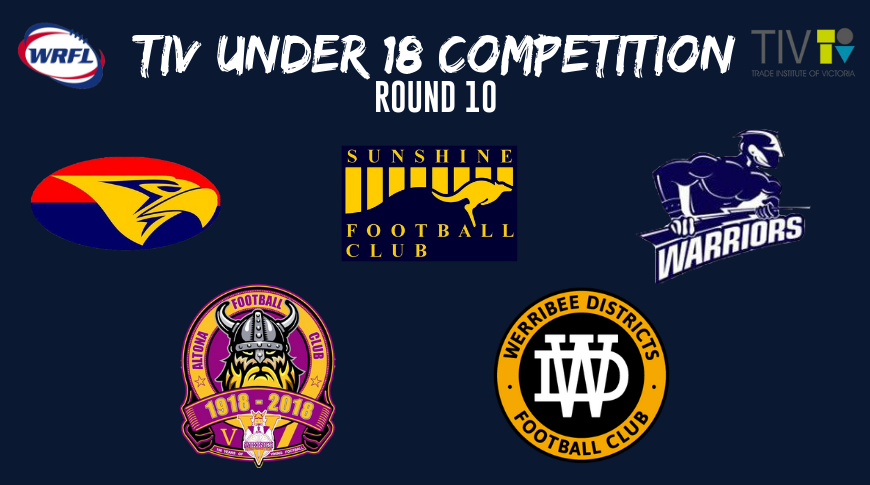 A traditional Melbourne winter downpour wasn’t enough to dampen the skills as round 10 of the 2019 TIV Under 18’s competition produced a series of cracking games, leaving the top three sides separated by just percentage at the end of the weekend.

Playing against a Point Cook side hungry for victory after back to back losses to Flemington and Spotswood, Werribee Districts 1 recognized the Bulldogs were going to attack the opening quarter with intensity, tenacity and dare.

However, the top of the table contenders flexed their muscles and enhanced their premiership credentials, outscoring their tenacious opposition by 35 points after the first break, on their way to recording an impressive 73-point victory at home.

Districts 1 has now scored 100 points or more in five of their last six games.

In the round’s other matches, fifth placed Yarraville Seddon claimed their second-succussive victory defeating a pesky St Albans Saints side fresh off their round 9 win over the Centrals, 12.14 (86) to 6.9 (45).

For the Eagles Ben Doll kicked 3 goals to be his team’s leading goal scorer for the second consecutive game, while Benjamin Ballard was again amongst his team’s best players.

Fresh off the bye, the Altona Vikings reclaimed top spot with an emphatic 112-point victory over Hoppers Crossing 2.

With 38 shots on goal to 6, the dominant, if inaccurate, performance by the Vikings included strong individual efforts by Bailey Kelly (4 goals), Chaitanya Sarikonda and the ever-reliable James Callaway.

Sunshine claimed their third victory of the season in their 60-point win over Werribee Centrals.

The Kangaroos put on a defensive clinic, holding the Centrals goalless for the first three quarters.

Sunshine was well led by a pair of debutants including James Wilkinson who kicked an equal game-high 2 goals, while Murray Purves was among his side’s best.

Meanwhile a strong five goal opening quarter was enough to see Werribee Districts 2 clasp their first win of June, defeating a fast finishing Spotswood side by 15-points at home, 10.11 (71) to 8.8 (56).

In a game of two halves, both sides had many influential contributors.

For the winners Jeremy Galea-Trifilo was Districts 2’s best player for the third week consecutive week, while the sixth-placed Spotswood side was well led by Luke Burns and Jazper Tonkin.

To complete round 10, Sunday’s clash between Flemington and Hoppers Crossing 1 saw the Warriors strengthen their position within the top four, defeating the Juniors by 70-points, 16.19 (115) to 7.3 (45).

With the two sides being separated by just 3 points after the first quarter, the Warriors used a dominant nine goal second half to claim their seventh victory of the season and more importantly keep a game ahead of fifth placed Yarraville Seddon.