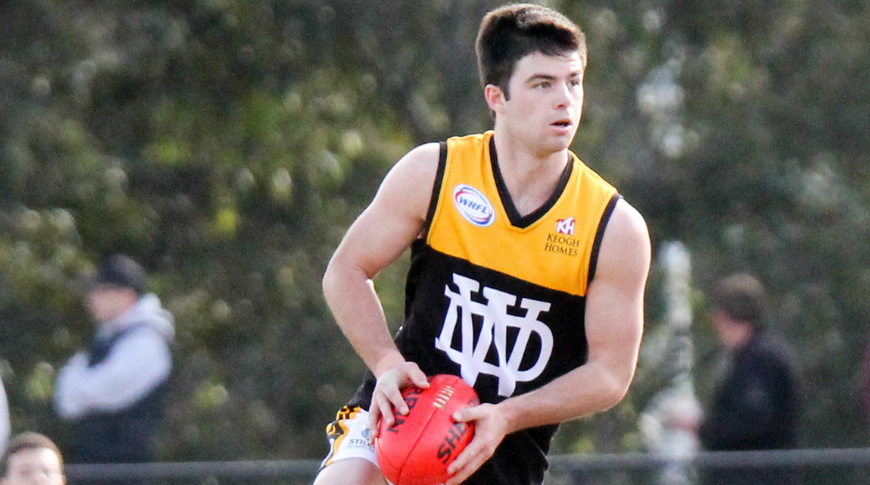 It was an action-packed round of RAMS Division 1 football, with premiership favourites stamping their mark with dominant wins, and tough battles between contenders providing plenty of entertainment.

The Vikings’ marking all over the ground was prominent, with the home side scoring the game’s first major through Jordan Robbins. Werribee Districts were intent on getting the ball through the corridor, utilising their speed towards goal through Nayef Hamad and Bailey Siwek. Altona and Patrick Rose responded, with the Vikings scoring leader getting the last two Altona goals to give them an 18-point lead at quarter-time.

Tigers’ coach Chris Gilham wasn’t happy with the “helter skelter, end-to-end” start to the contest, calling for more poise and execution from his midfielders, but continuing the same work rate and effort of the first term.

Gilham’s words seemed to have an effect, as Werribee Districts took control of the contest, with Andrew Panayi scoring two goals in a dominant term. Hamad and Siwek were again influential around the ground, giving their forwards a chance to score four goals to one in the term, giving the visitors a ten-point lead at the main break.

Altona responded well to start the third quarter, slotting the first two goals to take a slim lead back, through great play from Kyle Blake and Daniel O’Leary. Lachlan Rainbow was quick to get a much-needed Tigers goal, but Altona were quick to answer again, carrying a slim 10-point lead into the last change.

Vikings coach Saade Ghazi called his players to cover the inside and stop the Tigers’ run through the corridor, while getting their own ball through the quickest route to goal. Reassuring his players that the mild wind wasn’t a major factor and it was “all about getting our hands on the footy and winning the contested ball”, Ghazi’s passionate words stirred his players for a last quarter surge.

Despite that energy and focus from Altona, it was Werribee who struck first through Chris Molivas, and then hitting the front again through Cam Lee’s goal. Altona then answered again through Steven Kennedy, before a double 50m penalty gave Siwek a chance to even the scores. Hamad added more to his highlight reel, with a brilliant defensive intercept and run setting up Molivas to convert, but the Tigers forward only could add a behind. This miss managed to be crucial, with the Tigers holding on in the last two minutes to secure a gripping one-point win.

Elsewhere, Spotswood dominated Albion with a 166-point win, highlighted by four-goal hauls to Wayne Patak and Murray Boyd. Spotswood will look to continue their strong start after Easter when they take on Altona in what promises to be a closely-fought clash.

Caroline Springs also recorded a strong win, with Luke Edmondson and Tyson Mihocek helping the Lakers defeat Point Cook by 50-points. Caroline Springs will be keen to continue their form against St Albans next round, while Point Cook will look for their first win since promotion when they host Sunshine.

Hoppers Crossing also managed to defeat St Albans by one-point in the other standout clash from this round’s action.

Brandon Houlihan kicked the winning goal for the Warriors in the dying minutes of the game.

The Warriors will next take on Werribee Districts on Anzac Day.

Reigning premiers Deer Park continued their strong start to the season, with Jase Perkins and Jack Redpath dominating up forward for a 69-point win.