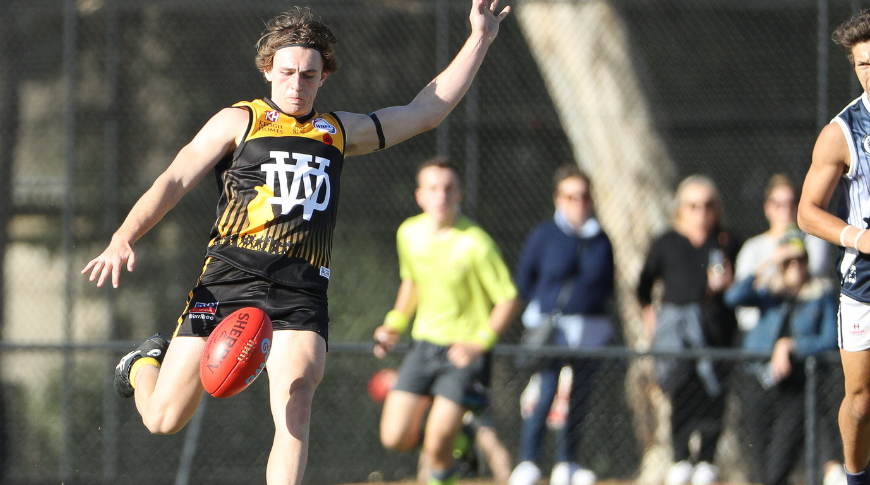 It was 3rd vs 4th in St Albans, with Werribee Districts solidifying their top four position with a hard-fought 18-point win. The visitors started quickly, with their running and direct kicking giving the St Albans defenders constant headaches.

Unable to clear their lines or find targets coming out of their defensive 50, the home side faced a 31-point deficit at the first change.

At the quarter-time huddle, a fired-up Perry Meka was irate with St Albans’ lack of effort in the first quarter.  He emphasised that the football played in the first term “wasn’t our brand, and our brand is good enough to beat them”.

His players certainly responded as Tim Jenkins quickly got the first of the second term for St Albans, starting an impressive run that featured the intensity and effort Meka desired. With Tom Donoghue and Jarrod Tuppen making an impact for St Albans, the Werribee Districts run started to dry up.

Ben Said was unstoppable in the second term, kicking three goals to help St Albans close the gap to five points, but Werribee Districts managed to kick goals against the run of play, going into the main change with a ten-point lead.

After half-time, the visitors began to kick away through strong play from Dillion Viojo-Rainbow and Lee Johnston, extending the Werribee Districts lead to 44-points at three-quarter-time. St Albans continued to fight, only conceding one goal for the last term, but ultimately ran out of time in a fantastic clash. Said finished with seven goals in a terrific display for the home side.

In other action, Altona dealt Deer Park their first loss of 2019, with Elliot Cavallaro’s five goals helping the Vikings to a 68-point win. Altona will look to continue their strong form next week against Point Cook, while Deer Park will be hoping for better success when they take on Hoppers Crossing.

The Warriors will also be looking to bounce back after a loss, as they went down to Spotswood by 22-points. Charlie Nastasi’s five goals and Gareth Newton’s play continued Spotswood’s strong start to the season, as they look forward to a clash with Werribee Districts next week.

Caroline Springs were too strong for Sunshine, securing a 33-point win. The Kangaroos will gather themselves as they take on a rebounding St Albans next weekend.

Point Cook registered their first win since promotion in 2019, defeating Albion by 37-points. Mason Kip and Will Ward were the standouts for the Bulldogs. Albion will continue to search for a first win next weekend, when they travel to Caroline Springs.