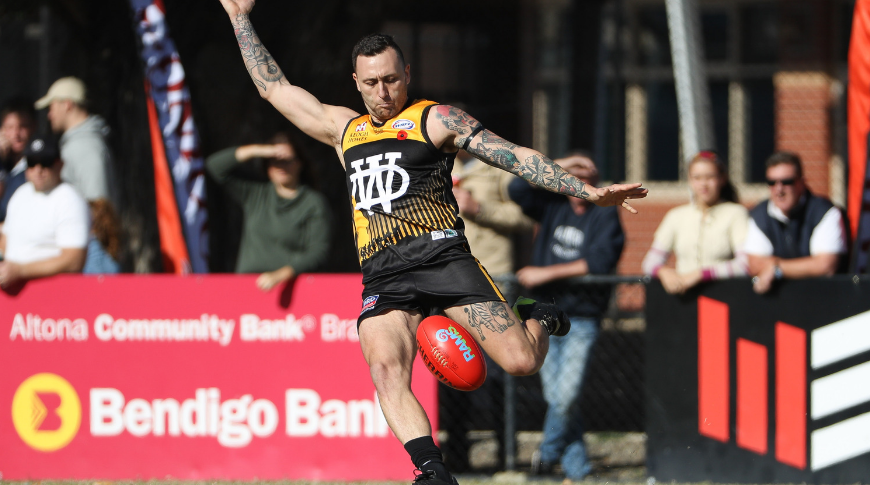 It was a weekend of dominant performances in RAMS Division 1 football, with a close three-point Werribee Districts win over Spotswood the standout contest.

The home team came out in a flurry early, with Wayne Patak drilling two goals to give Spotswood the ideal start. Both teams’ defenders were standouts early, with the Tigers’ Caleb Sullivan marking everything. Werribee were able to fight back with goals to Cameron Lee and Daniel Schibeci, trailing Spotswood 16-15 at quarter-time.

Spotswood coach Anthony Eames was unhappy at the quarter-time huddle, particularly with his side’s delivery inside forward 50, calling for “smarter and composed” football.

Immediately the Woodsmen came out firing in the second term, with Jordan Boyd goaling from the tightest of angles. The game was quick to turn into a seesawing contest, as both sides continued to exchange goals.

The home side’s run began to come through, as a brilliant surge from Charlie Nastasi led to a superb team goal finished off by Brydan Hodgson. Aside from a fantastic Connor Thar finish, Werribee struggled to make too many inroads as the quarter went on, leaving Spotswood with an 11-point lead at half-time.

After the main break, the Tigers emerged like a different team, as Dillon Viojo-Rainbow’s class began to shine through. Lee Johnston and Werribee continued to lift, feeding two majors for Christopher Molivas and another superb finish for Thar. The Tigers poured on 5.7 to Spotswood’s three behinds, with the visitors run and class too much for Spotswood.

Werribee went into the last change with a 23-point lead, where coach Chris Gillham was full of praise for his side’s third quarter blitz. Gillham also urged his players to not let off, stating that they “needed to score to win, maintain the overlap, use our legs and keep carrying the football”.

Spotswood came out in the last term with the momentum, as Gareth Newton nailed a goal to give the home side the perfect start they needed. The Woodsemen’s defenders were quick to mark and play on at every opportunity, fighting hard to get forward. Unfortunately Spotswood were being let down by some inside 50-disposal and inaccurate kicking, as they continued to trail the Tigers.

Viojo-Rainbow’s left-foot cannon was able to find Lachlan Rainbow for a much-needed Werribee goal, before a miraculous goal was kicked by Spotswood’s David Iaccarino.

Spotswood entered red time still down by 17 points, looking like the clock was going to beat them. Quickly the game turned with goals to Murray Boyd and Newton bring the home side back to within three points. Unfortunately, it was too little too late, as Werribee held on in an exciting clash, leapfrogging Spotswood into second place on the ladder.

In the other Division 1 action, Caroline Springs scored a huge 214-point win over Albion, with Luke Edmondson and Cody Raak both kicking bags of seven goals.

Deer Park were able to get back on the winners list, with Spiros Amarantidis’ six goals helping the reigning premiers to a 20-point win over Hoppers Crossing.

Finally, St Albans bounced back with a 56-point win over Sunshine, with Ben Said continuing his strong season for St Albans.

After the bye for the 2019 WorkSafe Community Championships, Albion will host Sunshine as they look for their first win of 2019, while Altona will look to continue their strong as they take on Caroline Springs.

Hoppers Crossing will look for a return to the winners list as they host Point Cook, while Spotswood will hope they can turn around their heartbreaking loss when they battle against St Albans.

Lastly, in the game of the round, Werribee Districts will look to stamp their mark as premiership contenders when they host Deer Park in what promises to be an epic clash.