Home › Senior › TIGERS AND VIKINGS STUN IN ROUND 1 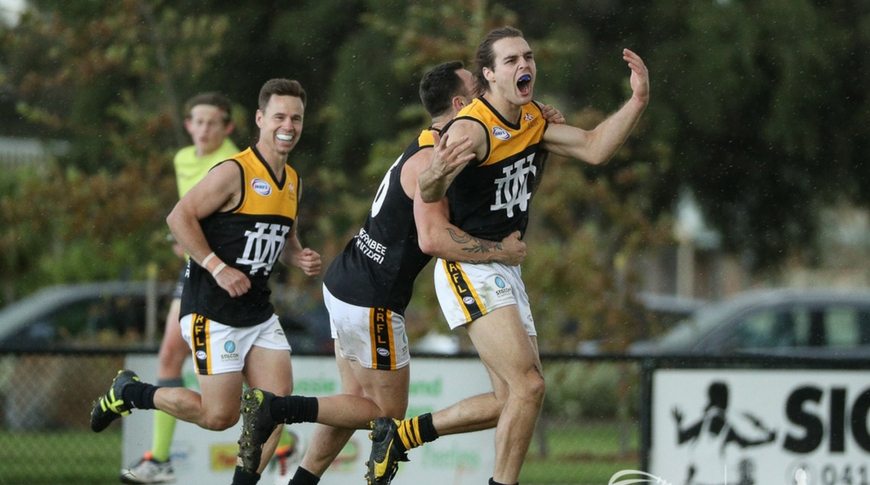 TIGERS AND VIKINGS STUN IN ROUND 1

For the first time since 1988, the two teams who played-off in the Division 1 Grand Final the previous year have lost their opening round matches.

Both Deer Park and Sunshine couldn’t get the job done in Round 1, losing to Altona and Werribee Districts respectively.

It is only early stages of the 2018 season, but Altona showed they’re in the premiership hunt by producing a stunning fight back in the fourth quarter to knock off reigning premier Deer Park, 9.10. (64) to 8.13. (61).

After unfurling the flag for winning the 2017 premiership pregame, Deer Park started slowly, but were able to get on top in the second quarter and entered half time with a six-point advantage.

The Lions added to their lead in the third term, but squandered their lead, conceding five goals to two in the fourth quarter as the Vikings came from behind to steal the win.

Mitch Norton was one of the best on ground for the Vikings, while Chris Stewart was prolific for the Lions.

Altona also broke a drought over the weekend, the win was their first at John McLeod Oval since Round 7, 2001.

Vikings will host Spotswood in Round 2 while the Lions will look to get their first win of the RAMS Division 1 competition against Hoppers Crossing on Saturday.

Werribee Districts stunned Sunshine, with the Tigers defeating the Kangaroos by 31-points at Kinder Smith Reserve.

The two teams were locked in a tough battle for most of the afternoon. The scores were locked at half-time and three-quarter-time and it looked like the game would come down to the wire. However, Werribee Districts kept Sunshine to just one goal in the final term, while they kicked six to run out Round 1 winners.

Andrew Panayi was among the best for the Tigers, he kicked four goals in a wet and windy match. New recruit Daniel Schibeci kicked two.

Jordan Mead’s three goals helped Hoppers Crossing come from behind in another tight matchup to defeat St Albans by three-points.

The Warriors led by 22-points at half time but conceded five goals in the third term to flip the game on its head.

Josh Mellington booted five while Rex Hickman added four in the 75-point win. Jordan Doering was also among the best for the Lakers.

On Saturday, the Cats will face the Werribee Districts in Round 2.

Finally, Spotswood produced the biggest win of the round downing Wyndhamvale by 77-points.

Seven behinds in the first term kept the Woodsmen from gaining a bigger lead at the first break, but broke the game open with five second quarter majors.

The Falcons added three of their own in the third but couldn’t stop the hosts who added another eight goals in the second half.