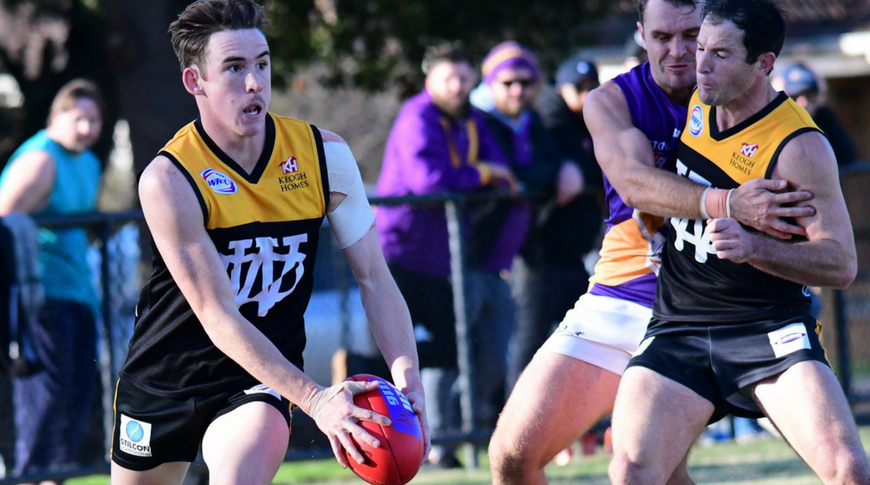 Werribee Districts have affirmed themselves as a genuine premiership contender after the Tigers outclassed and outmuscled Altona in the top-of-the-table clash on Saturday.

Werribee Districts romped home to a 49-point win against the Vikings. Contining their unbeaten start to 2018, earning them top spot on the RAMS Division 1 ladder.

The match itself was fierce and hard fought from the opening bounce, as neither side wanted to give an inch. Both sides hit the scoreboard often in the first half, but it was the Districts who led by 13-points at the main break.

As they have done so often in 2018 however, Werribee continued to pressure their opponents and as a result was far too strong for the Vikings.

The Tigers had an even spread of goal kickers, with Rhyce Prismall, Chris Molivas, Ryan Harrington, Cameron Lee and Trent Lee all kicking three goals each.

It was a disappointing result for the Vikings, who have been a strong attacking team over the first six rounds. They only had three goal kickers, Patrick Rose 4, Mitch Turnbull 3 and Harry Tanner 2.

In perhaps their biggest test of the season, the Werribee Districts will next face reigning premiers Deer Park in Round 8.

Meanwhile, the Lions gave the competition a gentle reminder of their attacking prowess, comfortably accounting for Caroline Springs by 140-points.

Sunshine kicked seven goals to three in the second half, turning a 13-point half-time deficit into a 13- point win against a determined Albion outfit.

Josh Linton was best on ground, he was influential across the ground and was busy up forward, kicking three goals. Brenton Quinn and Liam Cavanagh also bagged three goals in the win.

Sunshine now head into the bye having won two consecutive games. The Kangaroos face St Albans in Round 8.

Spotswood cruised to a 52-point win against the Demons, kicking 14 goals to six after quarter time.

Brandon Walshe was important for the Woodsman, while Dylan Callard was the main target up forward, he kicked three goals. Murray Boyd also continued his good form, putting in a dominant display.

The win sees Spotswood maintain its position in the top four ahead of its clash with Caroline Springs.

The Warriors would be disappointed with their accuracy in-front of goal, having kicked an incredible 32-behinds for the match.

For Wyndhamvale, Josh Mould backed-up his best on ground performance from last week, with another impressive display. He kicked three goals.