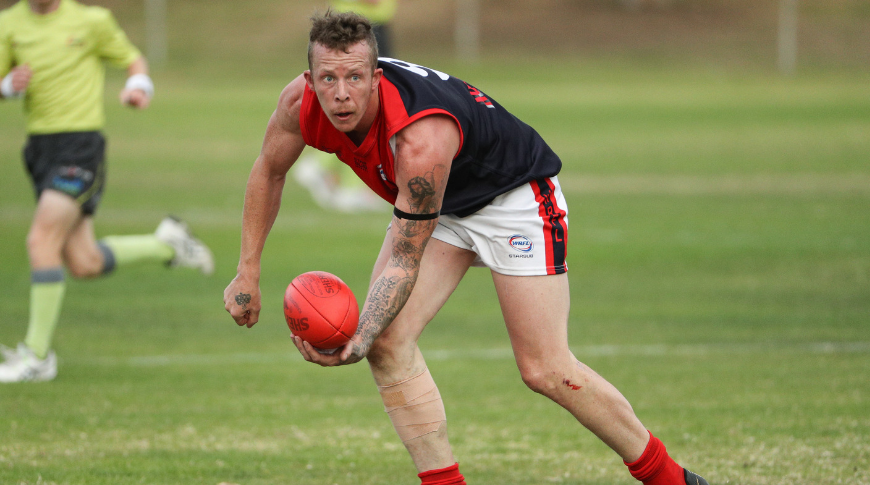 THE SAINTS CONTINUE TO MARCH

While some premiership contenders secured big wins over the weekend, this round of RAMS Division 1 football was all about St Albans. The Saints took their biggest scalp of the season, when they defeated ladder leaders Altona by 10-points.

This finals-like match constantly see-sawed in momentum, as Altona and Josh MacDonald kept looking like blowing the game open. To St Albans credit, the home side kept fighting back, keeping the margin to 15-points at the main change. The second half told a different story, when Altona were engulfed by St Albans’ momentum in the third term, and the game turned on its head.

The Saints kicked 5.4 to Altona’s 1.1, with Ben Said unstoppable up forward. Melbourne legend Adem Yze, in the classic three-quarter sleeves and glove, also kicked two classy goals to stamp his name on the contest, as the Saints continued to pour on the pressure.

Former Bulldog and West Coast Eagle Josh Hill also proved his class around the contest, with St Albans ruckman David Kovacevic giving his midfielders silver service to drive inside 50 and hold a 12-point lead at the last break.

St Albans held on, and had the home crowd celebrating hard when the final siren went. Other results mean that despite their big scalp, St Albans still sit 6th on the ladder, highlighting the competitiveness of Division 1 football in 2019. Despite their ladder position, sides now will be wary of the damage this St Albans side can do.

Spotswood also continued their own strong form, with Sam Davis helping the Woodsmen to a 58-point win over Caroline Springs. The win draws Spotswood level with Altona, now trailing by only percentage. Caroline Springs will hope to bounce back when they host Deer Park, while Spotswood will travel to Sunshine and try to keep their winning form going.

Deer Park were determined not to suffer a third-straight loss, bouncing back with a commanding 126-point win over Point Cook. Jase Perkins overtook Ben Said on the RAMS Division 1 goalkicking leader board, kicking 10 goals in Deer Park’s much needed win.

Under Saturday night lights, Hoppers Crossing were too strong for Albion, with the Warriors recording a 119-point win.