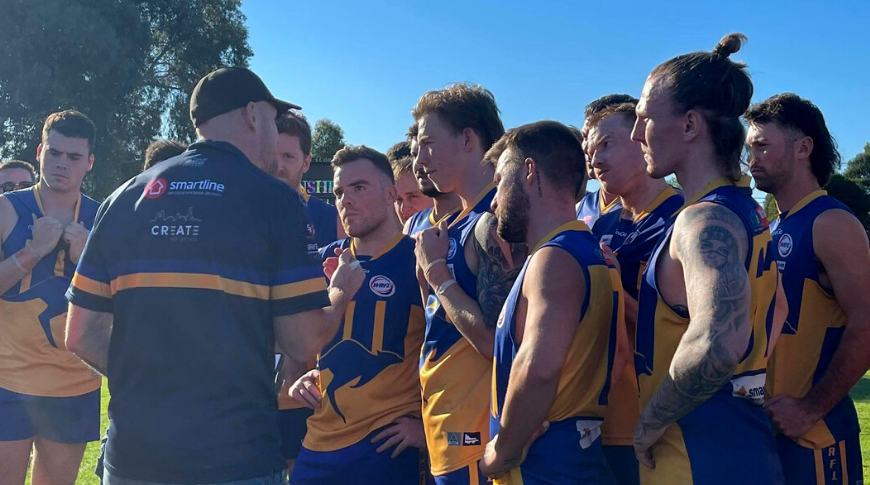 It had been 687 days since Sunshine had tasted victory in the WRFL, but upon the return of TIV Division 1 football, the Kangaroos got back on the winners list with a thrilling four-point victory over Yarraville Seddon.

The Eagles took ascendancy early, with a strong seven-goal first term, through Archi Manton’s starring role up forward. Manton finished with four majors and was in everything for the home side, but Sunshine weren’t going down easily.

Daniel Torcia and Brian Graham willed the Kangaroos back in front by four-points at the final change, setting up an exciting final term where no team conceded a score. Sunshine were able to hold firm and record their first win of 2021, in rapturous scenes for the club. The Kangaroos will hope to make it two in a row when they take on St Albans, while Yarraville Seddon have a chance to bounce back against Caroline Springs.

The Lakers will also be hoping for a form reversal, as they went down to Deer Park by 16 points. After a closely fought first term, the Lions started to flex their experience and firepower, via four majors from Spiros Amarantidis and a starring display from Will Krithararis. Deer Park will continue their finals push against Spotswood next weekend.

At Hogans Road, Spotswood suffered a 38-point loss to second-placed Hoppers Crossing, as the Warriors furthered their premiership contention with an impressive performance. Brenton Payne continued his form in front of goal with four majors, taking his tally to a TIV Division-1 leading 30 goals for 2021. Daniel Strnak also starred for Hoppers Crossing, who will take on Altona next weekend in a top-of-the-table clash.

The Vikings were too strong for Point Cook, conquering the Bulldogs by 109 points, adding useful percentage to Altona’s firm grip on top of the ladder. Point Cook will be eager to add to their solitary win of 2021, when they take on Werribee Districts next weekend.

The Tigers took advantage of a five goal to zero first term and never looked back against St Albans, winning by 31 points. Lachy Rainbow was superb for Werribee Districts, while Sean Gregory and Andrew Panayi were impressive up forward, helping keep the Tigers in third position on the TIV Division 1 ladder.