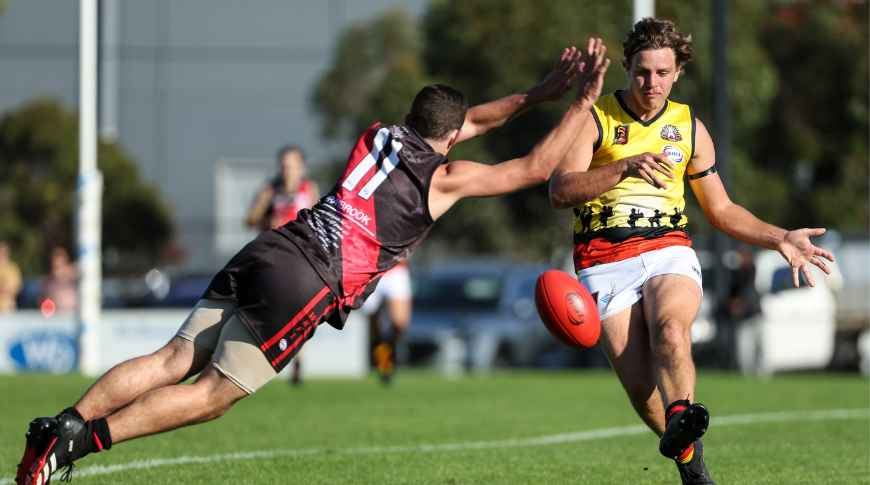 The Suns have overcome a valiant Braybrook outfit by 14-points at Pennell Reserve in Alan Mance Motors Division 3.

The Brookers controlled the game early, making the most of the Suns’ inaccuracy at goal and heading into half-time with a 12-point buffer.

However, the Suns responded in outstanding fashion after the main break.

They piled on eight goals to four in the second half to complete an impressive turnaround performance.

Blake Jago kicked four goals for the visitors in a best-on-ground performance. Josh Foster also played well for the Suns.

Shaun Buttigieg-Clarke slotted four goals, while Aidan O’Rafferty was best-on-ground for the home side.

The Suns remain undefeated to start the season, with the bye next week.

The challenge doesn’t get any easier for Braybrook next week, as they are set to face ladder-leaders Albanvale.

The Cobras enjoyed a 291-point thrashing of Laverton, as Nathan Johnson and Liam Montrose kicked 14 and 11 goals respectively.

Bobby Saric also slotted seven majors, alongside Brayden Montebruno who kicked six of his own.

Ostinn Bellingham and Jacob Maschewski were among the standouts for the Cobras in their dominant display.

The Magpies will come up against Sunshine Heights this coming week, who are fresh off an emphatic victory against Tarneit.

Elliot Rosado was the most influential player on the ground, along with Alex Mokdsi who managed four goals for the Dragons.

For the away side, Jordan Fletcher and Liam Simic were among the best.

Tarneit move on to face North Sunshine next Saturday, where both sides will be looking to kickstart their 2022 season with their first win.