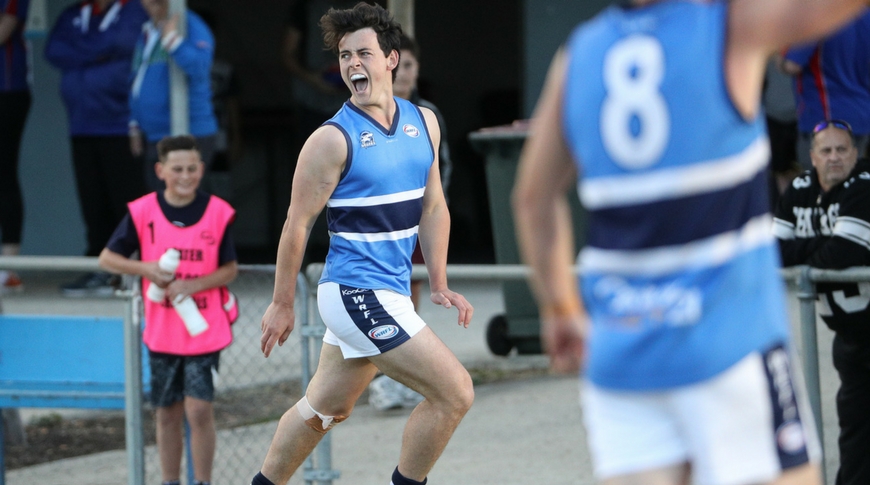 The Wyndham Suns’ early season dominance continued at North Sunshine, as the Suns recorded a dominant win over the Roadrunners in a fiery clash.

Wyndham didn’t take long to show why they’re the ladder-leaders, with Brad Busuttil kicking the Suns’ first on the back of impressive ball movement and forays inside 50.

North Sunshine struggled to hold back the Wyndham assault, despite Richard Wurki-Barba’s scintillating runs off half-back. The Suns kept pushing forward, with Dan Hovey starting to fire, ensuring the Suns had a 30-point lead at quarter time.

The Suns stepped it up a notch in the second quarter, moving the ball seamlessly from end-to-end, with Hovey and Rhys Kirk looking ominous with every forward entry. The Roadrunners managed to push back, with Shaun Hughes and Jackson Nawi willing North Sunshine back into the contest. The game went up a notch, as Hughes was sent off and numerous players from both sides got involved in physical confrontations. Wyndham capitalised and regained ascendancy, going into the main change with a 47-point lead.

The second half belonged to the Suns, as Jarrod Vella continued to rack up possessions across half-back, providing Kirk and Hovey with chances to kick majors. Navi, Wurki-Barba and Josh McPherson continued to work tirelessly for North Sunshine, but ultimately their delivery inside-50 paled in comparison to the Wyndham Suns.

Hughes and Steven Neralic continued to go at it all game, but in the end, it was Neralic and Wyndham who proved too good, winning by 70-points, continuing their unbeaten start to 2018.

The win was Laverton’s first against Glen Orden since 1999 Round 14 Division 2 at Laverton Park.

Glen Orden will be looking to get their first win against Braybrook next week, while Laverton will test their mettle against Wyndham.

At Ainsworth Reserve, Point Cook Centrals proved too strong for Sunshine Heights, running away with a 46-point win off the back of 6-goals from Heath Grundy. The Sharks will look to continue their form against North Sunshine next week, while Sunshine Heights will be hoping to bounce back against Tarneit.

Finally, Tarneit outclassed Braybrook at home, with Todd Lawrie and Nathan Schmidt helping them to a 56-point win.