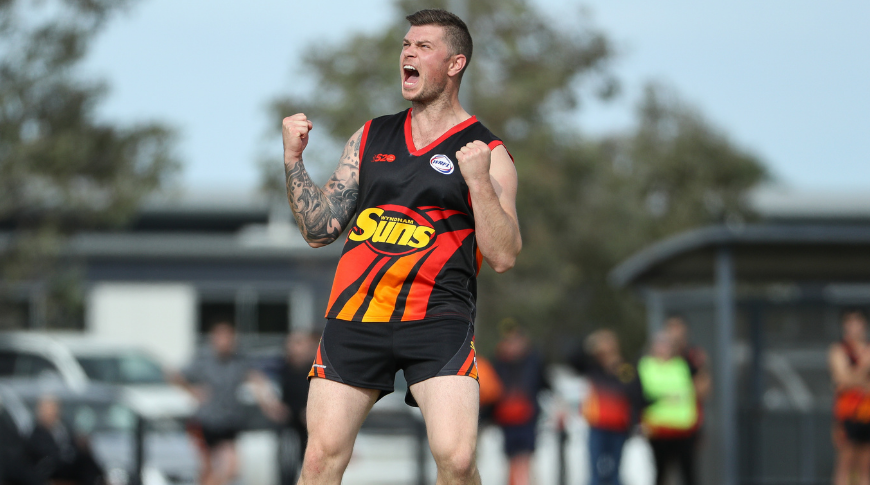 SUNS HAVE THE PERFECT START

Round 1 of the Division 3 WRFL season kicked-off on Saturday afternoon and the Wyndham Suns started with a hard fought 16-point win over Braybrook at Goddard Street Reserve.

The win was set up by coach Dean Cachia who kicked six goals for the afternoon and was well supported by Chris Lear and Riley Buckley who were amongst the best. After an arm wrestle in the opening term a couple of late goals to Shane Fitzgerald and Cachia helped the Suns to a 12-point quarter time lead.

The Suns were harder at the contest and made the Brookers continually turn the ball over and allow easy intercept marks across half back, whilst up forward for the Suns, Cachia was in great form with the Brookers struggling to contain the big forward.

After skipping out to a 34-point lead early in the third quarter a raft of undisciplined acts allowed the Brookers back into the contest, two 50 meter penalties and a center square infringement all cost goals and the Brookers who on the back of Aidan O’Rafferty and Oscar Gordan closed the margin to just four-points at three quarter time.

The final term started with a goal to John Tomelty, but was quickly answered by the Brookers Matthew Turcinovich. With the game in the balance Todd Lawrie kicked a crucial goal followed by Dean Cachia kicking his fifth and sixth goals to ice the match and give the Suns the perfect start to the season.

In other matches Kym Taylor booted eight goals to help lead Albanvale to a 149-point win over North Sunshine and Sunshine Heights recorded a 47-point over Tarneit at Ainsworth Reserve with Keelan Privitera kicking six goals and Robert Greto bagging five majors, Laverton had the bye.

Next week Laverton will play their first game of the season against Sunshine Heights and Tarneit will look to respond against the Suns. On Anzac Day, Braybrook will host North Sunshine.

Albanvale have the bye.