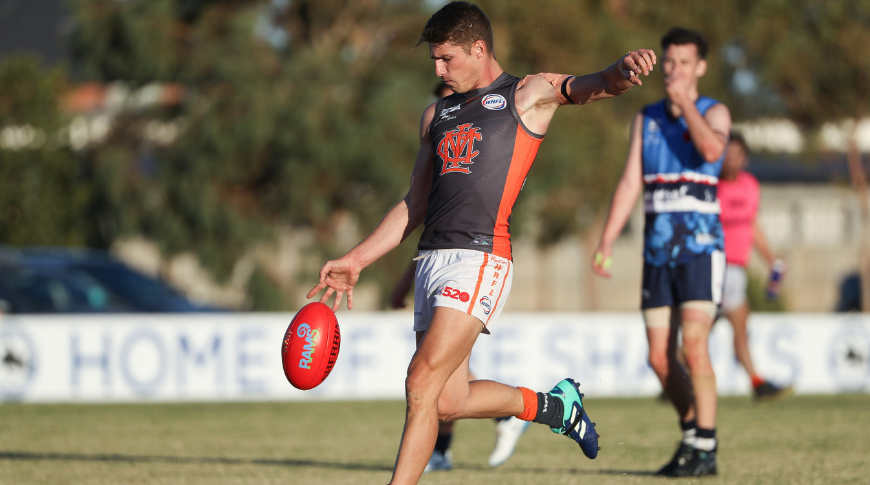 In a battle of first versus second, Wyndhamvale blitzed early kicking eight goals to one in the first quarter, maintaining a forty-point lead at each break heading into the final term which set up the win.

Jack Tessari continued his great form and was named best on, his three goals made it 11 in three games as the Falcons show no signs of stopping in their dominant start to the season.

The loss pushes the Sharks from second to fourth ahead of a clash with Parkside in Round Six, pitting third versus fourth.

Wyndhamvale host Newport making it their second consecutive game of facing the second team on the ladder.

Newport stamped its intentions as finals contenders with its fourth straight win, knocking off North Footscray by 14-points.

The Devils looked dangerous early and jumped out to a 17-point lead after the first quarter, but the hosts hit back in the second yet still trailed by two points at half time.

North Footscray will rue the loss, a game they had in their grasp, as they looked forward to a clash with rivals West Footscray.

The game was anyone’s heading into the fourth quarter as the visitors led by just five, but four goals to zero from the Storm helped them escape with a 32-point win.

Manor Lakes will look for two wins on the trot when they host Yarraville in Round Six.

Owen King’s round-high seven majors were too much for Parkside to overcome, Yarravile Seddon cruising to a 57-point thumping.