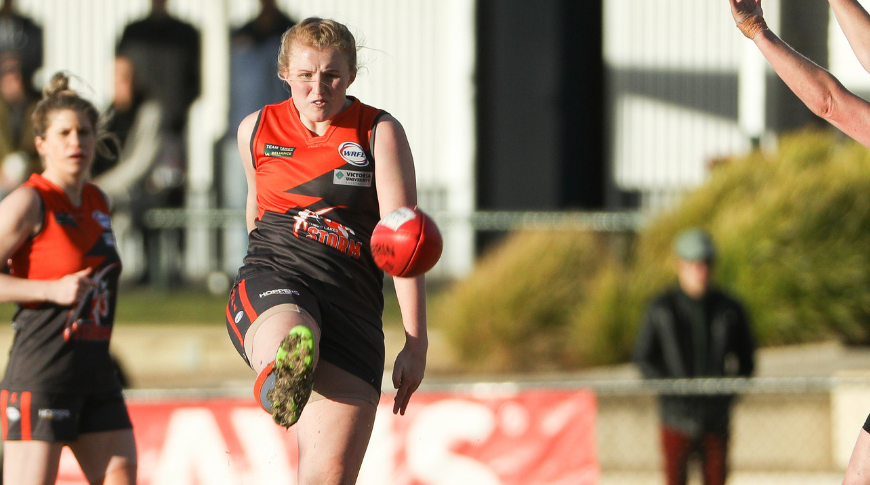 Manor Lakes re-affirmed its status as one of the teams to beat in the upcoming Victoria University Polytechnic Senior Women’s Finals Series, defeating an in-form Spotswood at Converse Oval.

The margin was 22-points in favour of the Storm at the main break, but a brilliant third term from the visitors ensured the four premiership points was headed to Manor Lakes, with the team kicking five goals to zero.

Yana Frontczak kicked four goals in the victory, while Dayle Dunshea was named best on ground.

Momentum swung in favour of Caroline Springs in the third quarter, kicking three goals, which meant the margin was just two-points heading into the final stanza.

No goals were scored in the final quarter, just points. The Lakers kicked three behinds and edged in-front. When the final siren sounded, it was Caroline Springs in-front by a solitary point.

West Footscray broke a five-game losing streak after a convincing win over Tarneit on Friday night.

The Roosters ran away with a 51-point win. Molly Boorman kicked three goals.

Point Cook continued their strong form after a close win over the Yarraville Seddon Eagles.

Despite a slow start from the Bulldogs, who trailed by five points at half-time, they fought back in the second half to level the scores at the final break before taking it home in the dying minutes.

Laverton are back on the winners’ list following a resounding win over Braybrook. The Magpies had eight individual goal-kickers, with Jadene Kirk and Krystal Lilomaiava leading the charge with two apiece.

North Sunshine have scored their second win for the season, defeating Wyndhamvale by two-points.

Although they looked strong early, the Falcons were unable to hold off the Roadrunners in the end.