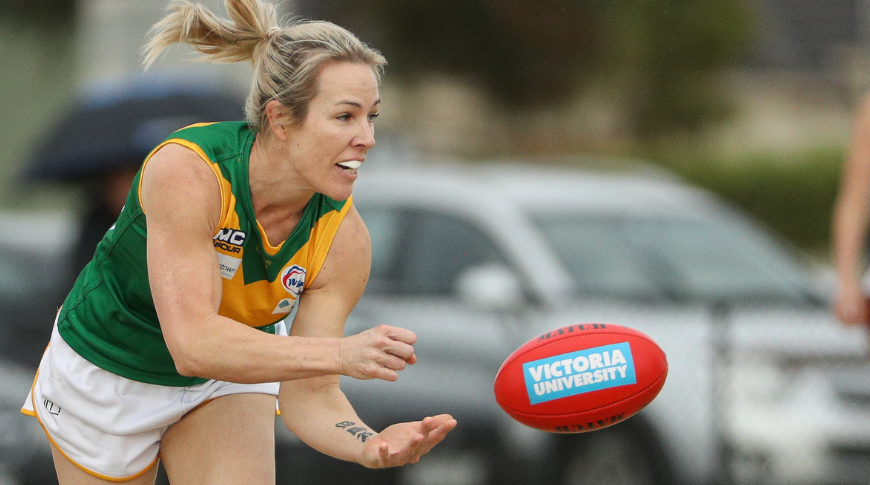 Spotswood have taken down the formerly undefeated Caroline Springs this week in tremendous fashion, beating the ladder-leaders by 85-points at Converse Oval.

Spotswood’s leading goal-kicker Caitlin Brennan was true to form, as she booted six goals in the Round 11 Victoria University Polytechnic Senior Women’s match.

The Lakers’ usual suspects were kept quiet by a solid midfield performance from the Spotswood girls.

Caitlyn Gashi and Gilda Incigneri both played well for the home side.

Alexandra Fato kicked Caroline Springs’ only goal, which came in the final term.

Point Cook have broken a three-match losing streak this week, after taking out North Sunshine in an impressive 42-point win on Friday night. The Bulldogs had control of the ball for most of the match, with 16 scoring shots to just four.

Tarneit also broke a winless streak on Friday, as they managed their first win since round 2, beating Wyndhamvale by 50-points. Emma Quinn led a list of seven individual goalkickers, booting two goals for her side.

Braybrook suffered a significant loss to Yarraville Seddon, as the Eagles were able to keep the home side scoreless for the match’s entirety, kicking eight goals.

After a slow start to the season, Yarraville Seddon have won four of their past seven matches. Their recent form makes them a real chance to contend for finals as the competition reaches the pointy end.

West Footscray have kept Manor Lakes to their lowest score all year, going down to one of the competition favourites by just 16-points.

Despite failing to get any score on the board, the Roosters played a strong defensive match in trying conditions and kept the Storm to just the one goal and forcing ten minor scores.

Point Cook Centrals beat Laverton by three goals in a Sunday twilight match, as their form holds them in good contention to take on the top three teams. The Sharks shared the ball well, with four individual goal-kickers kicking four goals.

The Sharks take on the very-much-in-form Spotswood next week, which will be a good test heading into the backend of the season.