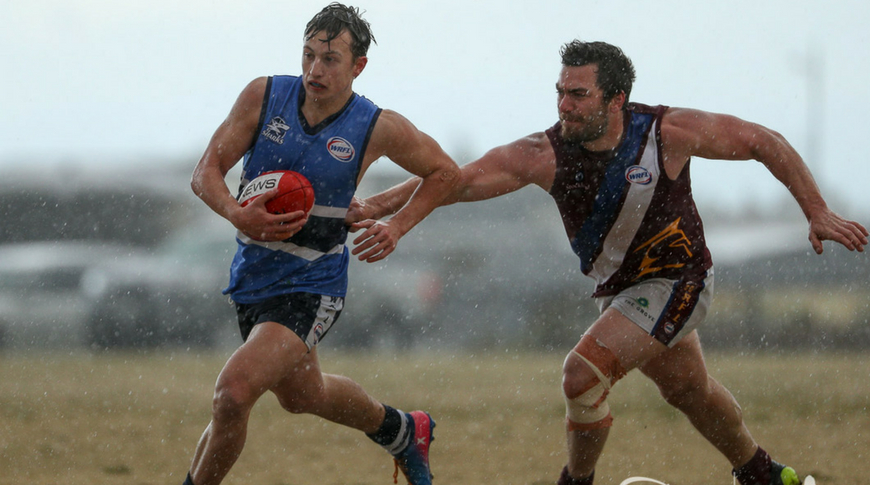 It was a wet and wild round of Division 3 football, as the final four were decided and a battle for top spot became a war against the weather.

At Featherbrook Reserve, Point Cook Centrals took on Tarneit with top spot up for grabs, setting up for an exciting encounter on the eve of finals. The strong gusts of wind blowing across the ground made it hard to keep the ball in play, with kicks drifting past their intended targets by 10-20 metres at times.

Richard Psaila was in everything for the Titans early in the contest, but Point Cook’s run was able to get them an early seven-point lead at quarter-time.

Psaila was able to get two quick goals for the Titans in the second term, but the Sharks were much more effective going forward, as Luke Henderson and Michael Szulc showed their class.

Taking an 11-point half-time lead, Point Cook Centrals were able to seize control of the game, with Riley Colbert racking up plenty of disposals and generating run. The weather descended into chaos, as heavy rain and wind assaulted the ground, and the game became a much tougher contest.

Psaila and Adam Miriklis battled hard for Tarneit, but the Sharks were too good, moving into first on the ladder with a 33-point win.

Braybrook managed to secure their ticket to finals, with a 65-point win over Laverton, led by an impressive game from Petar Pavlovic.

The Wyndham Suns continued their form slide, dropping a close-fought encounter to Sunshine Heights by seven points. The Dragons had a balanced effort in a low-scoring affair, getting over the Suns with two goals to in the last quarter. Sunshine Heights hope to get a win in their last game when they take on new ladder-leaders Point Cook Centrals.

Elsewhere, Glen Orden were too good for North Sunshine, winning by 57 points. Jack Burgess was impressive all day with three goals, while Robert Mcleod and Ashley Burke also were amongst the best. North Sunshine take on Wyndham in their last game for 2018, looking to go out with a victory at Dempster Park.