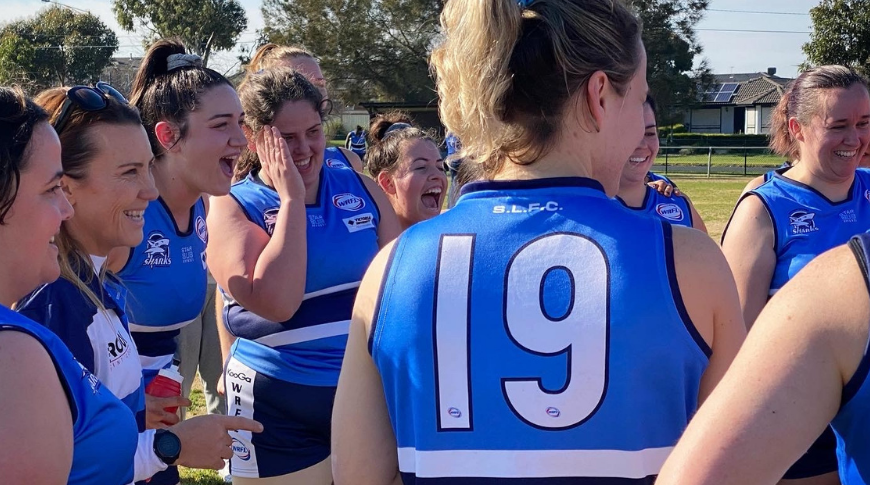 Round 11 saw the VU Polytechnic Women’s competition re-graded into two divisions, with the top six on the ladder at the conclusion of Round 10 landing in Division 1, and the bottom rounding out Division 2.

A sunny Saturday morning at Robert Bruce Reserve played stage to a pressure-cooker clash between Braybrook/Albanvale and Point Cook Centrals. Prior to the opening siren, the home side celebrated Tahlia Brown, as she ran out for her 50th game of senior footy, and the match kicked off with a bang.

A clever lead by Ebony Watkins early in the first term saw the Sharks skipper mark cleanly on the boundary and send the ball into the hands of Maddie Johnson, who converted for the goal. Sharnie Currie-Procter hit the scoreboard for the Shark’s second, off the back of huge forward surge from Mary Daw.

The Braybrook/Albanvale backline scrambled in defence, desperate to stop the Centrals, but full forward Mandy Seath’s boot proved too potent, bagging two more before the break.

The Sharks continued their forward pressure into the second term, with an energetic clearance out of the centre thanks to Alicia Collison, pushing the ball into their scoring 50. Fallon Courts stood tall in defence for Braybrook/Albanvale but was unable to stop Johnson snapping her second goal out of the pack.

Sam Oliver followed quickly with her first goal for the Shark’s side, and by the half-time siren, the visitors held a 56-point lead.

The Braybrook/Albanvale backline held strong against the Shark’s assault in the opening minutes of third term, with Courts again protecting the goal line and Natalie Lea and Sarah Jay O’Rourke working hard to keep their team out of danger.

The Point Cook Centrals surged again and by the close of the quarter, registered four more goals, including repeat efforts from Oliver and Currie-Procter, the latter clearly out to kick a bag.

Despite the score deficit, Braybrook/Albanvale came out firing in the fourth term, finally registering a goal, thanks to a huge boot out of the middle from Meagan Kovatchev. Natasha Coombs moved to capitalise on her team’s renewed momentum, pushing the ball forward up the boundary, but was foiled by a tough Shark’s midfield.

At the final siren Point Cook Centrals locked in a definitive win over their hosts, kicking 14.4. (88) to Braybrook/Albanvale’s 1.1. (7)

Across the round, Division 1 sides Point Cook and Werribee Centrals opened the schedule with a Friday night hit-out at Saltwater Reserve. The Centurions proved too strong for the Doggies, running over their opposition by 72-points. Centrals players Larrisa Renaut and Paige Cook starred for their side, kicking five and four goals respectively.

Caroline Springs and Manor Lakes met for the second time this season, with the Laker’s women donning their Indigenous guernsey to celebrate NAIDOC Week. From the opening siren Manor Lakes brought the intensity and held a strong lead at half-time. Caroline Springs lifted after the break with Giselle Lambley kicking the Laker’s only goal before Manor Lakes doubled down to lock in a 33-point victory. Lindsay Newton and Jaimi Paten were recognised for their efforts and named amongst the Storm’s best.

Spotswood hosted Hoppers Crossing for their Division 1 rematch, and the Wolves again proved that they’re out to claim a flag. The match looked to be fairly even-sided at the halftime break — but the home side came out firing in the third term, overcoming the Warriors in a 45-point victory. Sofi Georgas was a standout for Spotswood, bagging three goals and was named in best for her side.

Division 2 was opened by Wyndhamvale and North Sunshine, and saw the Falcons take home the chocolates for a second time. Rachael Sherriff (2) and Chloe Muus (1) both hit the scoreboard, helping Wyndhamvale to a 17-point win.

To round out the weekend, West Footscray ran over Laverton in a definitive 51-point victory. Despite a spirited Magpies effort, the Roosters proved too strong, sealing the deal thanks to eight individual goal kickers. Kendra Trewavis and Katherine Belcher added two more goals apiece to their season tally.