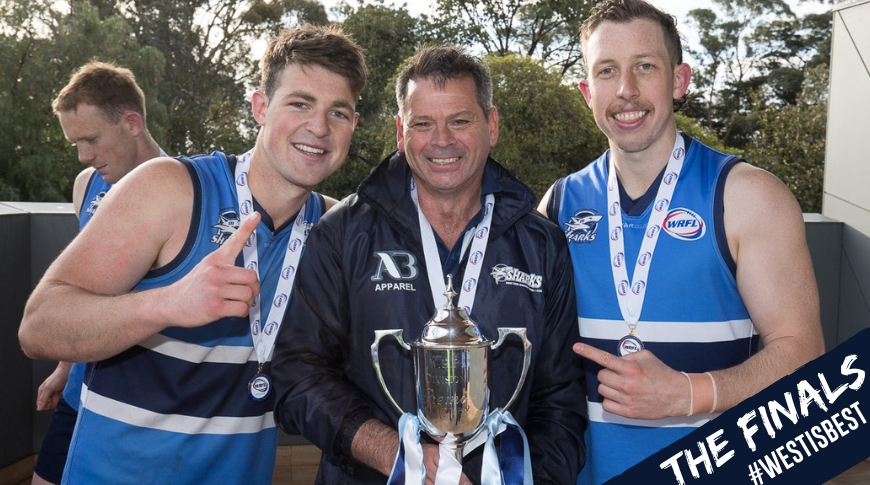 Putting together a consistent 2018 has culminated in a maiden premiership for Point Cook Centrals, winning the Division 3 Grand Final against the Wyndham Suns by 25 points at Avalon Airport Oval.

Despite the impending storms and wild winds, Avalon Airport Oval was packed out to see two clubs who have both had terrific 2018 seasons, with supporters given a clash worthy of at the grand stage. Right from the get-go, it was great contested action, with Paul Tomelty dominating out of the center for the Suns in the opening minutes of the quarter. Following this opening salvo from the Wyndham Suns in the middle, the Sharks were able to arrest control and utilize the strong wind in their favour.

Michael Szulc started to get involved in everything for Point Cook Centrals, though the Sharks inaccuracy ensured they went into quarter time with only a 17-point lead, after kicking 2.6.

Suns coach Michael Boothey called for better communication at the quarter-time huddle, especially unhappy with his forwards’ movement. Asking them to “wheel and go, deliver it high and fast; that’s what we need,” Wyndham came out looking to utilize the wind in the second term.

Despite kicking into the strong breeze, the Sharks were still managing to scrap entries inside 50, but were held up by an impressive Wyndham defence. Daniel Hovey managed to finally get the Suns on the board, as Wyndham begun to work back into the game through Tomelty, and Hayden Iannacone.

As the wind picked up and the rain came down hard, the ball begun resemble a bar of soap, particularly in the hands of Point Cook Centrals. Wyndham were much better at playing a more direct wet-weather style of game, as the weather had players slipping over all over the ground. While Matthew Andrew was able to lock down the dangerous Steve Neralic, Hovey was able to kick a second goal, while Rhys Kirk also worked into the game.

Kirk slotted a tough goal on the boundary right on the eve of half-time, to ensure that the Suns only trailed by four points at the main break.

With the game very much for grabs, the second half saw more sun and less wind, but the ground still incredibly slippery. These conditions continued to play into Wyndham’s hands, as they begun to pepper their forward 50 but without much success.

Tomelty and Luke Henderson continued to have a fierce battle around the contest, with Henderson and the Sharks beginning to work back into the game. Brydon Coles slotted a tough finish from the boundary line, before momentum swung after a major incident. Aaron Borg attempted to spoil an incoming ball but missed, catching Szulc square in the face, doing well not to concede more than a free kick and a 50m penalty.

Szulc converted and the Sharks seemed to garner momentum from the clash, with Szulc himself showing his class after a quiet second term, scoring another goal for the Sharks. Dean Henderson was able to execute a brilliant run-down tackle inside 50 and goal from the free kick, leaving Point Cook Centrals heading into the last quarter with a 24-point lead.

Darren Findlay called for his Sharks to “play basic football” and to “take things minute-by-minute, contest-by-contest”, leaving the third term huddle with his team on the verge of premiership glory.

Brent Sheean was sent behind the ball with immediate effect, as his class and composure halted numerous Wyndham forward thrusts in the last term. Down two players, with Jarrod Vella suffering a concussion and Hovey struggling to get back on after a corky, the Suns were unable to run with the Sharks, and fell short of a maiden premiership.

Point Cook Centrals were able to clinch the minor premiership and the Division 3 Premiership with an incredibly consistent season of exciting football, with a mix of youth and experience gelling well to deliver the club’s first premiership.

With Brent Sheean’s brilliant display all over the ground, he was a deserved winner of the Henry Turner Medal for best-on-ground, leading the Sharks to victory.