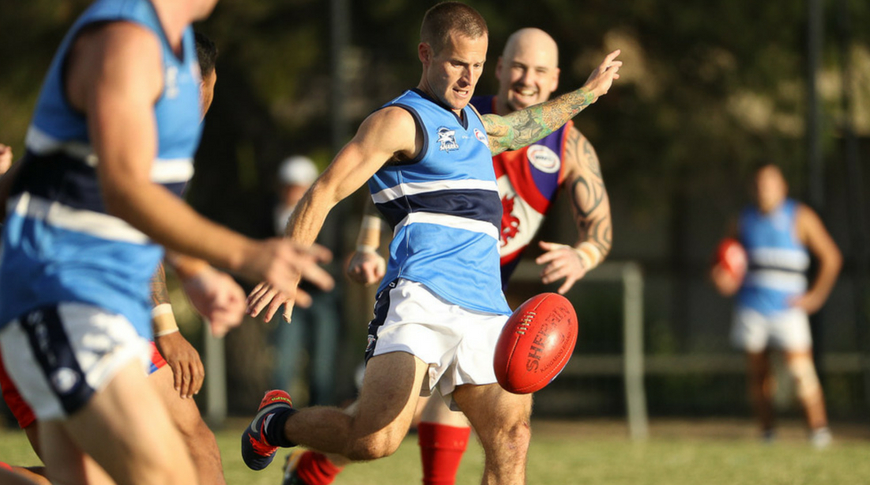 The first week of Division 3 finals action saw two fantastic clashes, with teams braving the harsh conditions to put on a show befitting of September footy.

At Braybrook, Point Cook Centrals showed their class with a hard-fought 17-point win over Tarneit, with the game having several momentum swings before the Sharks pulled away late.

In the early stages, the game was much more contested, with both teams going goal-for-goal in the threatening conditions. Luke Cook and Adam Miriklis were working hard, and were able to give the Titans a five point quarter time lead.

Sharks coach Darren Findlay wasn’t happy with his team’s lack of pressure, encouraging his players to tackle with aggression and to stop overusing the ball. Letting them know “the cute options aren’t going to work today, and to play through the middle”, the Sharks came out of the huddle with a much more direct approach in the second term.

Tyler Huynh’s forward pressure lifted and was able to create numerous opportunities for the Sharks forwards, however Point Cook’s delivery inside 50 was poor. Tarneit were able to keep things much simpler and feed the ball to Chris Benson, who’s after-siren banana goal gave the Titans a handy 14-point lead going into the half.

As the rain and wind came down in showers, the game slowed down to Tarneit’s liking, able to control the tempo and take advantage of their size advantage inside 50. Things changed quickly, as a goal for Michael Szulc started an end-of-quarter flurry for the Sharks, as the rain halted. Three goals in barely a few minutes left Point Cook with all the momentum going into the third term, leading by 10-points.

This momentum continued as Brent Sheean dominated in the middle for Point Cook, with Szuluc and Henderson did the damage up forward. Tarneit kept fighting but were ultimately overrun by the Sharks’ outside game.

In North Sunshine, the Wyndham Suns proved to be too strong for Braybrook, kicking away in a heated clash by 58-points.

The Suns came out of the blocks showcasing their earlier season form, with Steve Neralic looking imposing, leading their attack that had Braybrook trailing by 16-points at the first change.

In the second term, Braybrook came out with much more intent, working back into the contest after Beau Green kicked three goals in a flurry to give the Brookers the momentum.

Braybrook let the Suns back into the game, as they kicked three goals, including a Rhys Kirk shot after the siren, to now trail the Suns by 14-points at half time.

Unfortunately for Braybrook, they lost all momentum after the break, as Neralic and Kirk begun to dominate the air. Paul Cutajar-Milosev continued to present for Braybrook as he’s done all year, but Wyndham were too strong, ending Braybrook’s season.

Next week, Tarneit take on the Wyndham Suns for a place in the Division 3 Grand Final against Point Cook Centrals, in what promises to be a battle of the key forwards. Braybrook will be happy with their progress from 7th in 2017 to a finals appearance this year, but will again look to close the gap in 2019.