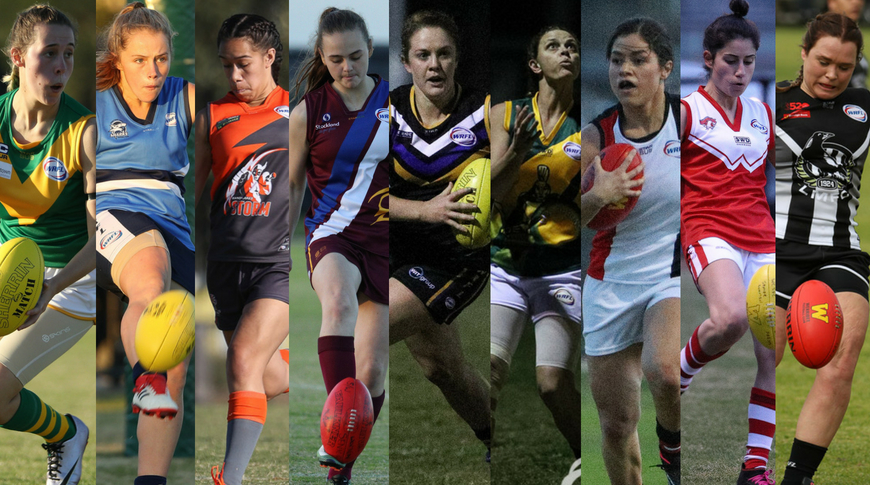 At the halfway point of the 2018 season, WRFL Media Manager Kristen Alebakis speaks with all the Victoria University Polytechnic Senior Women’s coaches about how their club is tracking after eight games and what their goals are for the remainder of the year.

“We are tracking really good, the girls have come along way since the start of the season,” coach Theo Theodorou said.

“The girls are aware of the challenge that is ahead of us and they are loving it.”

“We’re thrilled with the way the playing group have come together in the first half of the season and in only our second year,” coach Anthea Stathakis said.

“We have had a very solid pre-season which has held us in good stead and provided us with a perfect platform to launch into the second half of the year.

“The playing group understands that there is no room for complacency, and continue to train hard and achieve the goals set as a group at the beginning of the season.

“I’m very happy with the performance at present with the team, however we know the competition will continue to improve and we need to do likewise to ensure we get the rewards for the hard work put in on the training track. There is always room for improvement and we will continue to focus on a strong finish to the home and away season.”

“The group are tracking along nicely at the moment. Being undefeated at the half way point of the season is beyond expectations,” coach Nathan Smithwick said.

“Credit needs to be given to the playing group, they’re extremely driven and the attitude they all have towards training and game day is the reason we have started so strong.

“For the rest of the season we are just wanting to improve on the little things.

“We have a few weeks off now so getting some well earnt rest will hopefully put us in a good place mentally and physically coming up towards finals.

“We are looking forward to the challenges that we will face in the second half of the year, more importantly I’m looking forward to watching the group continue to develop into a great team, not only on the field but also off it.”

“The bulk of the team formed in late February/early March.  Considering many of the girls didn’t know each other, we didn’t have a pre-season (we have really only been training together for four months), and to be currently sitting in fifth position is a very promising first half of footy.

“We still have a long way to go in terms of our goals, but our first year was always about getting a Women’s team established at Werribee Centrals and having fun.  Our numbers are looking very solid and we have developed a welcoming, family friendly culture, which we hope will attract more players in the 2019 season.

“The camaraderie shown by the Centrals women in supporting other teams during their games off, has inspired other teams to follow suit.  This was our vision for the Centrals women’s side; to promote women’s football and show support to our fellow team mates.  We wanted to build a reputation that other teams will aspire to and we have been successful in achieving this!

“Given our current position on the ladder, we are potential final contenders and this has ramped up the excitement level at Centrals.  We have had a very tough fixture draw in the first half of the season, and we hope that the second half will bring about a greater number of victories, placing us in good stead for the finals’ series.”

“As a first year team we are happy with how everything is going,” coach Jerome Currie said.

“The comradery is good and our spirits are up, adding a Women’s team to the club has been a massive benefit to the club.

“We have had a few injuries, and have lost a bit of talent along the way.

“In the next part of the season we want to win a couple more games and be more competitive against Caroline Springs and Manor Lakes – the more established teams.”

“The Women’s side have shown gradual improvement throughout the season and have been competitive at times despite some crucial departures from the side,” President Mark Unwin said.

“They’ve managed to win two games this year which was what we’d hope to achieve.

“Hopefully the girls can manage another win from the remaining rounds and then work on developing their foundation skills and fitness in preparation for the 2019 season.”

“The women have improved immensely since the start of the season,” coach Derek Gatt said.

“Having already won two games for the year, our goals for the remainder of the season is to become more competitive and win some more games, as well as to continue to improve.”

“There has definitely been an improvement from the start of the season and I think the scoreboard doesn’t necessarily reflect the effort the girls are putting in,” coach Brendan Smith said.

“We want to remain focused and be competitive in the second part of the season.”

“The girls have been phenomenal in our first season,” coach Mal Hartshorne said.

“We won our first game against Tarneit and then we played the top three sides in Caroline Springs, Spotswood and Manor Lakes and they were great learning curves for us.

“Since then we have won four on the trot which has been really good.

“It has been fantastic whatever task we give the team they take it on and we are sitting fourth, two games clear.

“We have a bye this weekend, so we will re-load before we take on Werribee Centrals.

“We don’t want to get ahead of ourselves, we are taking things one week at a time.”