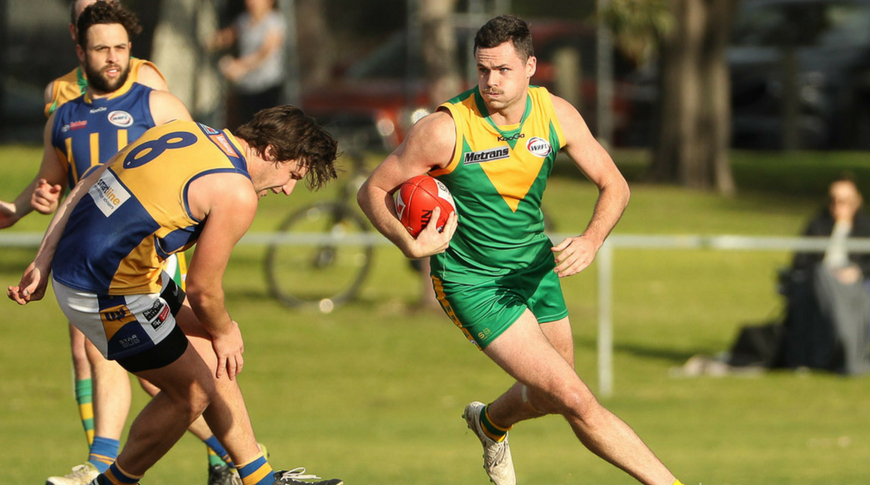 HOPPERS Crossing had all the momentum in the final quarter against Werribee Districts.

Braden Ferrari, Chris Endres, Mitch Palma, Ryan Kitchen and Brandon Houlihan all kicked goals for the Warriors in the final term and after being down by 26-points at three quarter time, looked like causing a big upset at Soldiers Reserve.

They had their chances in the final quarter. Hoppers Crossing had 10 shots on goal to three and in the final minute had multiple opportunities to score, but Werribee’s defence held up under enormous pressure.

The draw is Werribee Districts second of the season. They drew with Sunshine back in Round 10.

It’s a disappointing result for the Tigers, who now sit in third spot on the ladder. They were first before the weekend’s match.

Elsewhere, Deer Park scored a 139-point win over Albion, catapulting themselves into top spot on the RAMS Division 1 ladder.

The Lions were in ominous form from the first bounce and didn’t let up for four quarters; scoring at least 30 points in each term.

Chris Stewart, who has been in impressive goal kicking form in 2018, kicked six goals in the win.

Spotswood faced adversity early, but five goals to two in the last quarter helped the Woodsmen overcome a determined Sunshine.

The fifth-placed Woodsmen looked in trouble early and trailed by 11 at quarter time, but a goalless second term for the Kangaroos allowed the home side back into the game.

Spotswood kept the visitors at bay in the second half with a total team effort, finishing with 11 individual goal kickers for the day as they ran out 34-point victors.

David Iaccarino was best on ground, he kicked two goals for the Woodsman. Tom Langlands was also in great form.

The loss all but ends Sunshine’s finals hopes ahead of their match-up with Hoppers Crossing. They’ll need to win at least three of their final four matches if they are to make the finals.

Altona survived a late scare and despite scoring just two behinds in the fourth, managed to run out 4.16. (40) to 4.9. (33) winners against St Albans.

There were just eight goals combined, but a win is a win, with Altona now sit just percentage from top spot.

Percentage is all that separates the top three sides and with just four games to go in the season the race for first position is wide open.

Finally, Caroline Springs earnt its fourth win of the season, a five goal to one opening quarter was enough to down Wyndhamvale by 24-points.