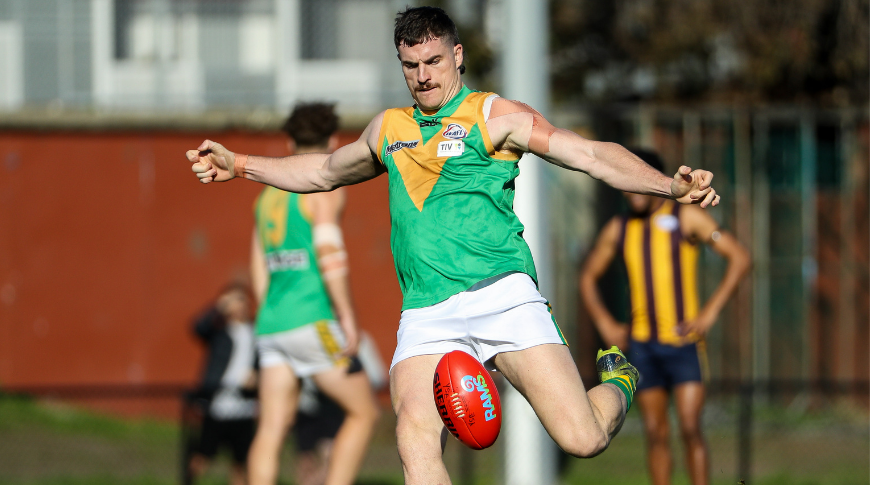 Altona continue to hold onto top spot on the TIV Division 1 ladder, after a thrilling five-point win over Caroline Springs.

After the Lakers held a nine-point advantage at quarter-time, it was the Vikings who responded, through the likes of Kevin Johnson and Mitch Van Den Berg. While Altona continued to build their lead from the second quarter, their inaccuracy almost came back to bite them in the last term.

Five goals in the last term to Caroline Springs had a thrilling finish on the cards, with the Lakers’ Isaac Plant and Nathan Aidonis willing their side to potentially upset the ladder-leaders. However, despite the Vikings kicking 8.17, four of those behinds coming in the last quarter, they did enough to record their sixth win of 2021.

Altona will look to continue their minor premiership tilt against Yarraville Seddon next weekend, while Caroline Springs will have another tough test in the form of Werribee Districts.

Second-placed Hoppers Crossing kept the pressure on Altona with a 26-point win over St Albans. After an explosive first-quarter where the Warriors banged on seven majors, the Saints worked their way back into the contest by half-time.

Jack Sims and Ben Hurley were fantastic for St Albans, as they held a slim five-point lead at three-quarter time. However, six goals to three in the last quarter in favour of the Warriors proved to be decisive. Corey Muscat was brilliant for Hoppers Crossing, while Brenton Payne extended his lead atop the TIV Division 1 goal-kicking charts with another bag of five majors. Next weekend, the Warriors will face Point Cook, while St Albans take on a resurgent Spotswood.

The Woodsmen were clinical against Yarraville Seddon, recording a dominant 89-point victory for their third consecutive win. Shamus Tippett was a force for Spotswood, while Brandon Walshe booted six majors.

Elsewhere, Deer Park showed their class with a thumping 82-point win over Point Cook, behind a brilliant four-goal performance from Nicolas Aleksovski. The Lions have a chance to entrench their position inside the top four with a win over Sunshine next week.

The Kangaroos are still searching for their first win of 2021, as they went down to Werribee Districts by 54-points. After scores were level at quarter-time, the Tigers kicked away through Bailey Siwek’s dominance in the midfield and Daniel Nielson’s four goals.