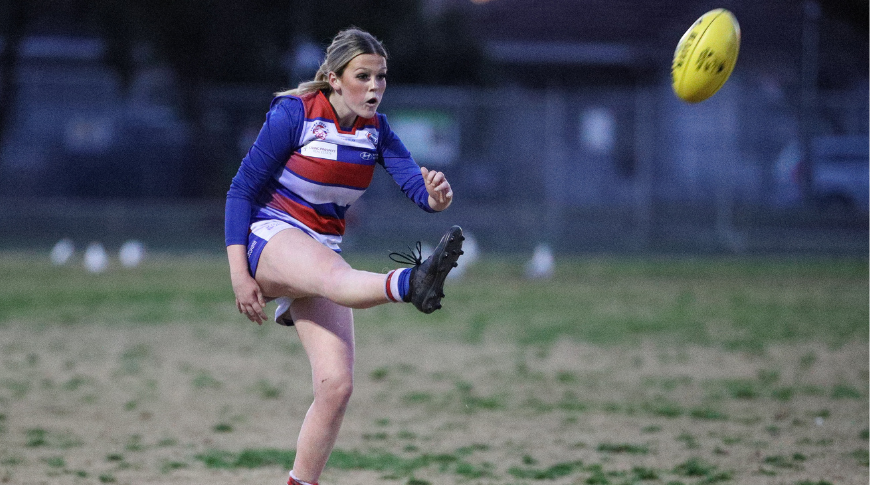 Crowds were back at the footy this weekend, and after a few days of wet weather the VU Polytechnic Women’s Competition delivered some huge scores and muddy spectacles!

The Love the Game Round 10 saw Point Cook go head-to-head with North Sunshine on a chilly Saturday evening. Despite the clear conditions, as the sun set on Dempster Park, the muddy deck meant both teams had to work hard to create their opportunities.

The opening siren saw both rucks immediately set the intensity, and the play pushed forward into North Sunshine’s scoring 50. A wet ball made it difficult to cleanly execute and Point Cook took advantage, turning the game back towards their scoring half. Despite some solid bodywork from North Sunshine’s Renee Bonnici, Point Cook surged forward, and Kristen Mckinnis was rewarded with a goal for her side.

A set shot in front of goals shortly after, saw Point Cook add a second to the scoreboard before quarter time.

At the break, North Sunshine coach Tom Ellard urged his team to keep pushing forward and encouraged the Roadrunners to protect their players so they could collect the footy cleanly in slippery conditions.

Point Cook set the tone with another goal at the top of the second quarter, after moving the ball successfully out of some very congested play. Both teams fought furiously, trying to hit clean hands in their scoring 50, with the Doggies again rewarded for persistence thanks to a solid boot from Rebecca Madden.

After the half-time break, the Doggies came out firing, leading with an excellent centre clearance. Again, both teams were hampered by the wet, with congested play surging back and forth in the middle of the ground. No score was registered by either side at the close of the quarter.

Coach Kerry Saunders praised her side at the three-quarter time huddle, pushing her team to keep clearing the packs and get the ball out of traffic.

Despite a goal-saving mark from North Sunshine’s full back, Point Cook’s Tegan Hamilton added to the scoreboard again in the final quarter. The final score was 5.2. (32) to 0.0 (0).

In other results, an early start at Pennell Reserve saw the Yarraville Seddon Eagles run over hosts Braybrook/Albanvale — 18.10. (118) to 0.1. (1). Britt Salt starred for the Eagles kicking an unbelievable 10 goals for her side and was named in best.

Caroline Springs took on West Footscray in a very muddy affair, banking a definitive 77-point win over the Roosters. Despite some great stoppage play from West Footscray, the Lakers were too strong, with Caitlin Pretty bagging four goals.

Saturday night saw Manor Lakes run rampant over Laverton, with the home side registering a huge win over the Magpies. It was clearly a shared team victory for the Storm, with 14 individual goal kickers.

It was a particularly significant home game for the Point Cook Centrals on Sunday when they hosted Hoppers Crossing, with Ebony Watkins playing her 100th game of senior footy. The Sharks co-Captain kicked the only goal for her side against the strong and skilful Warriors outfit. Ada Chessor and Olivia Millar starred for Hoppers, locking in a 64-point victory.

Rounding out the weekend, Werribee Centrals cemented their status as a competition contender, in a strong display against Wyndhamvale. The Centurions ran over the Falcons 19.12. (126) to 0.1.(1), with Larissa Renaut kicking a huge 10 goals for her side.