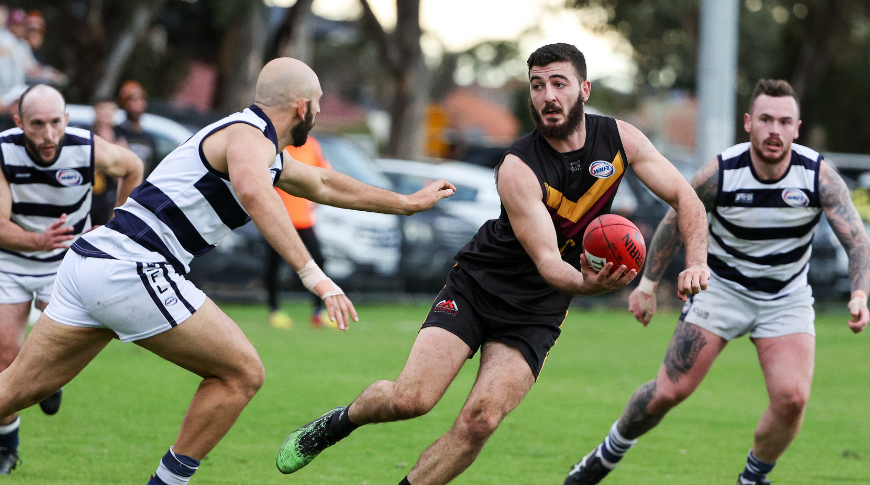 North Footscray has put an end to Wyndhamvale’s run of victories, overcoming inaccuracies to take an important win in Division 2.

The Falcons were held scoreless in the second term at Hansen Reserve, and despite four goals from Noah Cooney and three from Mathiang Kak, couldn’t bridge a 26-point half-time margin.

It was a tougher day for their neighbours, however, with the West Footscray running into a force that is Point Cook Centrals.

The Sharks mugged the Roosters at Shorten Reserve, showing no signs of tiring as the game went on, piling on a remarkable 37 goals to eventually record a 237-43 drubbing.

Elijah Sharp was named West Footscray’s best in a dour day for the Roosters, who are marooned winless on the bottom of the ladder. Point Cook Centrals meanwhile have consolidated their position atop the ladder with a whopping percentage of 285.41%, well clear of the also-undefeated Parkside in second.

The Hawks were held goalless in the first half, while their opponents gleefully piled on 13 majors in an even scoring effort at Henry Turner Reserve. While Glen Orden saved some face in the final term with four goals, they would still be bitterly disappointed in their last fortnight of football, which as yielded just 10 goals in total.

Jackson Lesko and Shaun Campbell booted five goals apiece for the Magpies, while Aaron Gauci impressed in his first game of the year. Henoch Kebede was the best for a sorry Glen Orden outfit, who have fallen to second-last on the ladder after Newport saluted at home.

Newport held the ascendancy at half-time, leading by 29 points, but was shell-shocked by the Cats in the third term, the visitors wasteful in a dominant 6.11 to 1.1 quarter. Albion had snatched the lead but had spent all their petrol; Newport turned the game once more and held on to win by 11-points.

Abdul Jawad continues to prove that he knows where the sticks are, booting three in a best-on-ground performance. Omar Abou-Zeid also contributed three goals, while Malek El-Hassan was lively.

Next week features a crucial clash between the two undefeated sides: Point Cook Centrals playing host to Parkside. The Sharks are white-hot but will need to be at their very best to defeat a talented opponent.

Albion plays host to North Footscray in what shapes to be a game that will determine the bottom half of the top four, while Glen Orden will host Newport.

West Footscray will search for its first win of the season when it travels to Wyndhamvale.