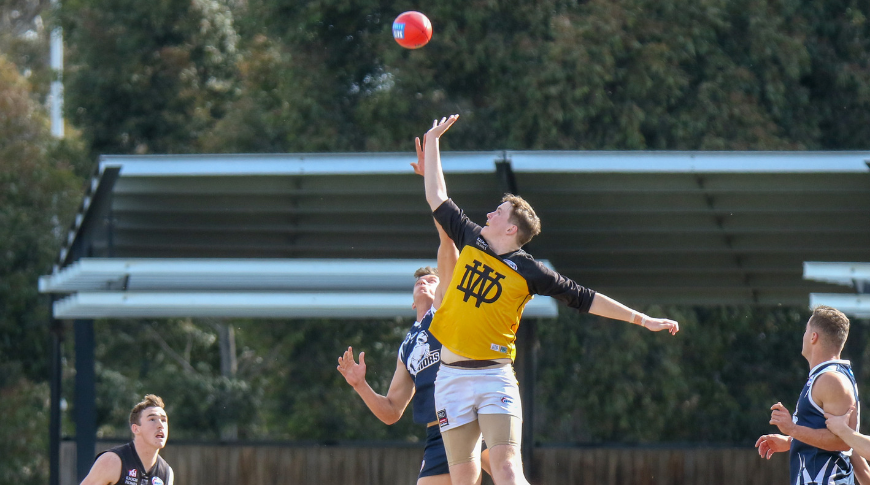 Finals action in RAMS Division 1 got underway this weekend, with two fantastic clashes over two days with varying conditions.

On Saturday, the sun shined in perfect conditions for the Qualifying Final between Spotswood and Deer Park. After a see-sawing affair befitting of a finals encounter, Deer Park’s September experience helped them to a 30-point win.

The Lions came out hard in the contest, but their first quarter burst was peppered with misfires in front of goal. The Woodsmen were much more accurate kicking with the breeze, holding a slim four-point lead at the first change.

At the quarter time huddle, Deer Park coach Mark Bullen was lamenting his side’s inability to capitalise on forward entries, calling for the Lions to “slow it down, get it through the corridor and avoid the pockets.”

Bullen also demanded his midfielders lower their eyes and stop bombing the ball inside forward 50, giving Brandon and Harley Walshe chances to dominate the air and provide rebound opportunities for Spotswood.

In the second term however, it was Anthony Eames’ side who got their game clicking, with Spotswood’s blistering run and carry on fire. Baxter Norton and Jason Marks were instrumental in driving the Woodsmen forward, giving David Iaccarino plenty of opportunities to score.

Despite Spotswood’s run, Deer Park would not stay down for long, as Kwame McHarg’s utterly electric movement got the Lions back to a mere 11-point deficit at half-time.

From the second half, Deer Park’s finals experience was telling, as McHarg continued to impact the contest and bring Jase Perkins into the game. The RAMS Division 1 leading goalkicker had so far been well held by Sam Davis, but quality players find a way to work back into the game, and Perkins did just that.

Able to kick 5.4 while still being beaten by Davis in a number of one-on-one contests, Perkins was the difference in the final result. McHarg and Shaun Harrison continued to provide dash for the Lions, which was telling as Spotswood lost Grant Williams to a left ankle injury and David Iaccarino to a groin issue.

Deer Park’s professional performance was too strong for a weakened Spotswood side who lacked the forward targets of the Lions. This now sets up a tantalising clash between Deer Park and minor premiers Altona on Saturday, which should be a fascinating contest.

Spotswood will hope they can bounce back from a disappointing result in their second chance against Werribee Districts, who were dominant in heavy conditions against Hoppers Crossing.

After opening up a 15-point lead at quarter-time, Werribee Districts didn’t look back for the rest of the contest, recording a dominant 68-point win over the Warriors.

After being defeated in both fixtures against Hoppers Crossing this year, Werribee Districts were out to prove a point in this elimination final. Chris Gillham was able to nullify the Warriors, allowing his smooth moving midfielders to gain ascendancy and to score with ease.

Not even an intermission due to lightning strikes could stop Districts getting on top, with Oscar Junker showing his class up forward with four majors. Will Sullivan was again brilliant around the ground, with Werribee Districts scoring 10 goals to Hoppers Crossing’s two in the second half.

The huge Districts win leads to a tantalising clash with Spotswood next Sunday, with both teams eager to show off their respective leg speed on the wide expanses of Avalon Airport Oval.