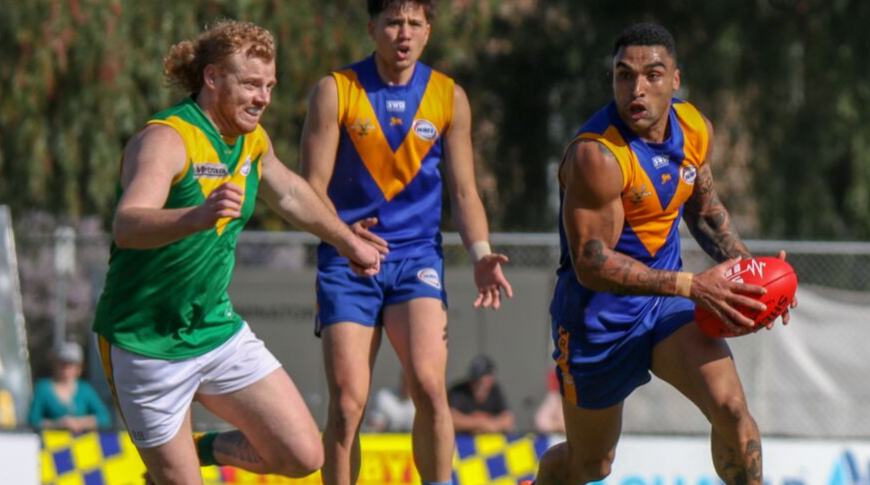 LIONS PROGRESS THROUGH TO GRAND FINAL

Deer Park have done it again, getting through to a seventh consecutive RAMS Division 1 Grand Final, with a 27-point win over Spotswood.

With sunny conditions over Avalon Airport Oval in Werribee, this Preliminary Final and replay of the first Qualifying Final, was set for an explosive encounter. It was an even start from both sides, with Spotswood unable to get too much of their famed run-and-carry going, and Deer Park making some mistakes up forward.

Nevertheless, it was a tough contest, with Jeremy Mills putting a heavy but fair bump on Brandon Walshe, which sent Walshe from the field with an AC injury.

In ominous signs, it was Jack Redpath who looked primed to get Deer Park off to the perfect start. Redpath has much been much (and often unfairly) maligned for his output transitioning from the AFL, but on Saturday he showed his class up forward. In Jase Perkins’ absence, Redpath was slotting them from all angles and distances, kicking three first-quarter goals.

Thanks to Redpath, the Lions held a slim six-point quarter-time lead. Spotswood coach Anthony Eames praised his side’s work rate, but cried out for better ball use. Calling for his forwards to “run their defenders around”, Eames kept reinforcing the need to take the game on.

However, it was Deer Park who looked to take the game on in the second term, but couldn’t find much success going inside 50, kicking inaccurately in front of goal. Similar to their previous encounter, Spotswood threatened to get a run on but, Deer Park again would find an answer. Max Bruin was playing a terrific game off the half back flank and driving through the middle, matching Wayne Patak who was working tirelessly inside to give the Woodsmen a chance.

It was made harder for Spotswood due to skipper David Iaccarino’s limited impact. Despite a gallant effort to play through his groin injury, Iaccarino was severely hobbled and couldn’t offer anything near his usual output. For a Spotswood side already bereft of marking targets down forward, this proved costly, and was highlighted by Deer Park’s own aerial success at the other end.

Despite a big Zach Del Grosso goal from long range momentarily lifting the Woodsmen, Scott Greenhough and the Lions struck right back again, carrying a 22-point lead into half time.

Deer Park have been renowned for their third-quarter success and this Preliminary Final was no different, as the Lions kicked four goals to one in the term. Spotswood could not get anything going, with creators Charlie Nastasi and Steven O’Bryan unable to get anything moving forward with efficiency.

2008 Brownlow Medallist Adam Cooney also tried hard to get the Woodsmen back into the contest, but unfortunately, like his teammates, was too inaccurate when it counted. Spotswood trailed Deer Park by 40 points at the three-quarter time siren, with significant work to do if a grand final appearance was on the cards.

While the Woodsmen battled to make it a contest and win the last term, it was too little and too late, unable to stop Bruin, Redpath and Shannon Byrnes leading Deer Park to a strong victory.

With Cooney, Iaccarino, and Brandon Walsh all unable to play out the game, a wounded Spotswood will be disappointed to have their strong 2019 season come short of a premiership battle next weekend.

Despite falling at the penultimate hurdle, the Woodsmen will be back again in 2020, hoping some off-season additions to their forward line help them make the leap next season.

The Lions will be hoping they can make history, as they try to become the first team in metropolitan football to win a staggering seven premierships in a row.

Standing in their way, is minor premiers Altona, who have had Deer Park’s number in 2019, winning all three encounters including in the finals a fortnight ago.