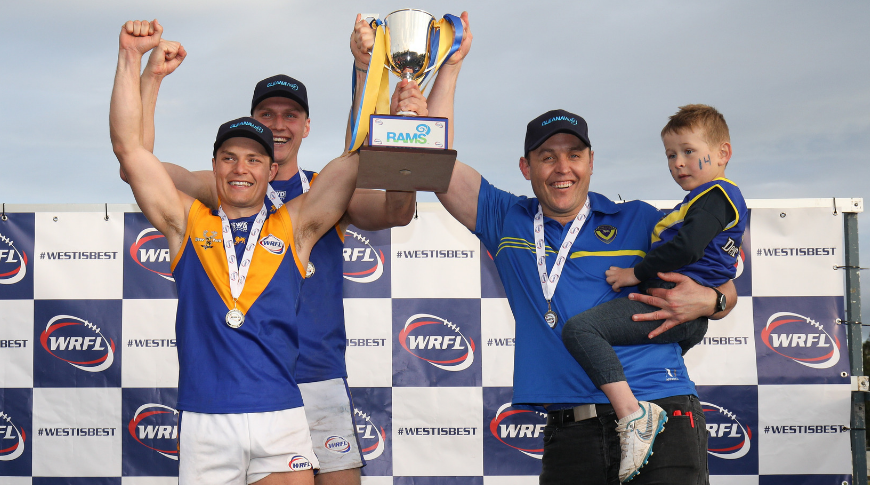 The Lions have been the benchmark side in RAMS Division 1 football since their first flag in 2013, but at various stages through this year, questions were asked if Deer Park could bring home another premiership. However, with trademark fight and one of the more thrilling comebacks in WRFL history, Deer Park were able to get the job done again.

Kicking with the trademark Avalon Airport Oval wind in the first quarter, the Lions struggled to convert several key opportunities. Looking to stretch the Vikings defense with multiple tall forwards, Deer Park certainly had more inside 50s, but couldn’t capitalise.

Altona continued to score their half chances, highlighted by a terrific Mitch Turnbull dribbling snap from almost 45 metres out.  The Vikings would have been satisfied with their performance against the wind, holding a slim five-point lead at the first change.

While Deer Park coach Mark Bullen was ruing his side’s inside 50 chances, Vikings coach Saade Ghazi was pleased with his team’s intent, highlighting his players had “brought the heat.”

The second term was full of more heat and run from the Vikings, as they showed the Altona-dominant crowd why they were the minor premiers in 2019. Jayden Post was sent forward to great effect, with Post’s elite marking ability helping structure the Altona attack, and take attention off Turnbull and Elliot Cavallaro.

Sean Tighe continued to show his dominance against the Deer Park ruck triumvirate, giving Steve Kennedy and Daniel O’Leary plenty of chances to dominate the clearances.

At the other end for Altona, Kelly Pickard was racking up intercept marks how midfielders accumulate possessions, continually disrupting any Deer Park forward thrusts. The Lions were battling hard, as Jeremy Mills’ strength around the ball helped Deer Park stay in the contest.

Similar to their opponents in the first quarter, Altona dominated the inside 50s with the wind but missed a number of opportunities to show that dominance on the scoreboard. The Lions contrastingly struggled to score at all, finally scoring their first goal of the term via a marking infringement and 50 metre penalty to Deer Park captain Jack Purton-Smith.

As the rain began to tumble, the Vikings continued to run and score, holding a handy 25-point lead at the main break.

Messages for Deer Park at half-time were clearly around aggression, as the third quarter was highlighted by multiple incidents that resulted in Lions players being sent off.

Jackson Barling set the tone with a big hit early in the term, before Josh MacDonald was taken high with a very late hit from Daniel Cooper, which resulted in the Lions key position player being sent off. MacDonald was able to play out the contest, but Altona were left shaken by the heated start to the quarter.

As the Altona crowd continued to throw noise at the Deer Park bench, they raised their voices after another incident resulting in one more send off. Lions veteran Chris Stewart had a terrific mark and chance to snap an easy goal, but chose to strike Pickard in the face.

With a two-man advantage, the Vikings had to fight back against a rampaging Deer Park with new-found aggression and ferocity around the contest, which did seem to shake those in purple and gold.

Altona again weren’t able to score as freely as they liked, with their run slowing down and questions around their multiple weeks off being raised.

With Cooper and Stewart off the ground, Deer Park were still able to strike back with goals to Shannon Byrnes and Kwame McHarg, and increased dominance around the ball. However, any pressure was relieved when Will Krithararis gave away consecutive 50m penalties, and gifted Turnbull his third of the afternoon.

With Pickard flying around into packs and taking multiple marks, Altona were able to hold onto a 19-point lead at the last change, with Deer Park coming at them with significant momentum.

After Marc Bullen called for the Lions to deliver “greater pressure at the ball and not the man” and to “take risks and use our overlap”, Deer Park came out against the wind with all guns blazing.

Despite not having significant impact earlier in the game, Spiros Amarantidis was able to make his mark, kicking the all-important first goal of the last term, with barely 90 seconds ticking over. As McHarg and Max Bruin’s influence around the ball grew, the Lions’ run and pressure was overwhelming, putting Altona on the back foot.

After Mills’ first and Amarantidis’ second, the margin was cut down a one-point margin, with an electric three goals in six minutes to start the last quarter. As the Lions surged again, Shaun Harrison was unable to slot the goal, but importantly drew the scores level.

With the atmosphere bubbling, Barling took a courageous diving mark over Ethan Taylor which unfortunately left the Deer Park veteran groggy and forced him from the ground. In the aftermath of the mark, another send-off for Deer Park was on the cards with Redpath given his marching orders.

Altona couldn’t find their run despite having a one-man advantage, as Scott Greenhough’s point at the other end gave Deer Park their first lead since the opening quarter. Both Jake McKenzie and Pickard were playing terrific games in their respective backlines, with both sides unable to break through for a major score.

The Lions were able to score crucial behinds, as Trent Williams was placed behind the ball to stop any Altona goals. With one last thrust, the ball was launched into the forward line but sailed over the head of Post, with the Vikings unable to find one of their vaunted forwards for a desperately needed goal.

With the Altona forward line flooded, Deer Park were able to hold on in one of the most heart-stopping finishes to a WRFL Grand Final in recent memory, leaving the Vikings players and fans heartbroken.

Deer Park midfielder Jeremy Mills was adjudged best on ground, with a terrific four quarter display in his first grand final for the Lions.

Now a seven-time premiership player, Chris Stewart was in shock, but was full of praise for his side’s grit and ability to hang for a record seventh consecutive premiership.

“It’s history, it’s something that the club should be incredibly proud of. People have come and gone, and no one can beat us,” Stewart said post-game.