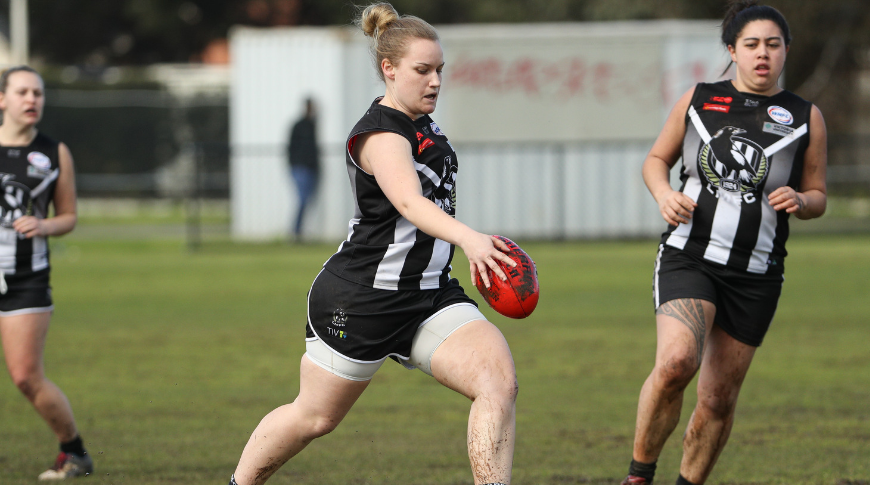 Manor Lakes have moved into top spot on the Victoria University Polytechnic Senior Women’s ladder after a hard-fought victory over Caroline Springs at Howqua Reserve on Sunday.

The Storm lost by a point, when the two premiership contenders met earlier this season, so they were determined to change the result.

Caroline Springs charged home in the final term and despite Manor Lakes scoring just two behinds, the home side held on to score their 12th victory of 2019.

Two teams who have been fighting it out for a top-five position also played at the weekend, with Werribee Centrals defeating Point Cook Centrals by 20-points.

Centrals had 18 shots on goal, in comparison to the Sharks’ eight.

Braybrook went down to Spotswood in a very one-sided affair, losing by 155-points.

Caitlin Brennan was in fine form, booting five goals, as Lauren Dundon followed up last week’s seven-goal performance with another bag of five.

Laverton put themselves back on the winner’s list after struggling in recent weeks, with a 20-point victory over Point Cook.

The Bulldogs’ accuracy in front of goal let them down, with seven behinds making up their score for the afternoon, as the Magpies took advantage of their chances. Laverton had three individual goal-scorers, as Andrea Carige kicked her first goal for the year.

Finally, Tarneit had a 39-point win over Wyndhamvale, running away with the match following a tight first quarter.

Madeline Johnson led the goal-kicking for the match with five, as one of five individual goal-kickers for Tarneit.

Courtney Southern and Isabel Choate each kicked a goal for Wyndhamvale.