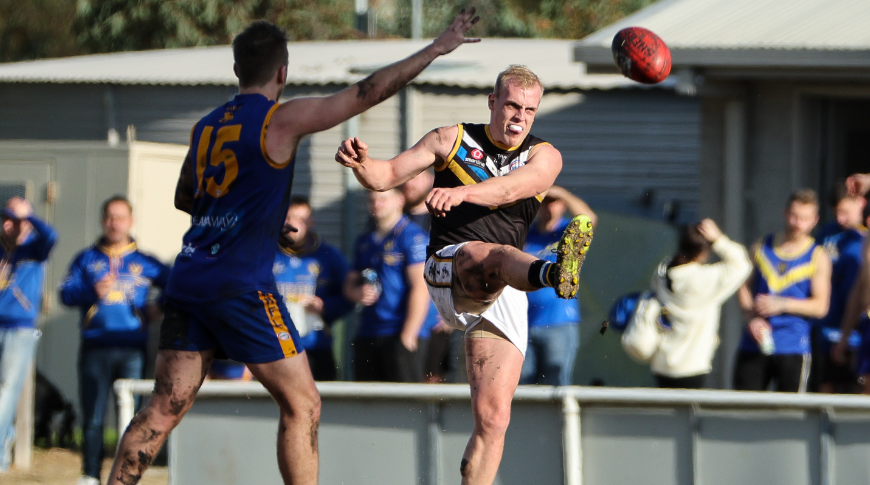 The Lakers got off to a strong start with 13 scoring shots in the first quarter, but inaccurate kicking kept their quarter time lead to just 17-points.

Neither side could gain an advantage in the second before the visitors took control in the third term and maintained their advantage in the last to run out comfortable 15.17. (107) to 9.13. (67).

Caroline Springs had 11 different goal kickers in the win, their 10th straight this season.

Tate Wood was impressive in the win, as we Max Tessari and Nathan Aidonis.

For Deer Park, ruckman Scott Greenhough continued his good form, while Levi Greenwood played an important role for the Lions.

The loss means Deer Park have now dropped to fifth on the ladder, while the Lakers are still unbeaten on top of the TIV Division 1 ladder.

Spotswood weren’t troubled in its 65-point win against Yarraville-Seddon, the Woodsmen now sitting just one game outside the top four.

A blistering first term got the home side started before seven goals to two in the second half quelled any Eagles comeback hopes.

The Vikings continue to keep pace with the ladder-leading Lakers as they won each quarter against the Saints.

Josh Bench was pivotal in the midfield as was Taylor Whitford – who is having a standout 2022 season.

Hoppers Crossing kept Sunshine to just two goals for the match as they dominated the Kangaroos in their 110-point smashing.

Josh Pickess, who is leading the WRFL tackle count this season, also played well. For Sunshine, Ethan Jackson and Tom Mundy were among the best.

The star forward booted a career-high 10 goals in his side’s 131-point smashing. He has now kicked 15 goals in his past two games.

Werribee Districts will face-off with Altona on Saturday.