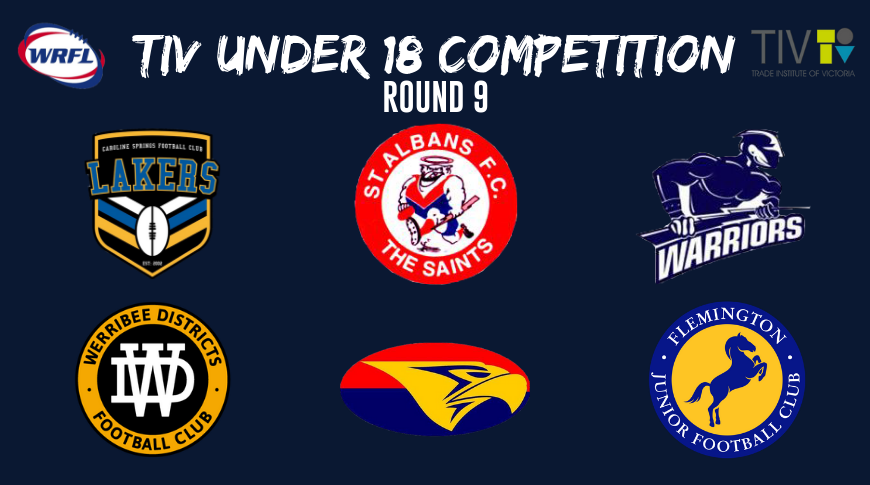 Round 9 of the 2019 TIV Under 18’s competition produced a new ladder leader as the race between the top four teams continues to heat up.

Winners of their last eight games and trailing the ladder leading Altona Vikings by just percentage, Caroline Springs were the overwhelming favorites heading into their home clash against sixth-placed Spotswood and played accordingly, winning by 68-points, 14.10 (94) to 4.2 (26).

The Lakers suffocating defense claimed another scalp, limiting a red-hot Spotswood side – winners of their last three games – to their lowest score of the season to date.

With Altona having the bye, Caroline Spring’s ninth win of the season rocketed the Lakers to outright first place and importantly closed the margin of percentage by 4 points.

Dylan Hurlston played his strongest game to date, while Jamie Ristoski and Harry were among the best, continuing their prominent seasons to date.

District 1’s had their seventh win of the year, defeating Hoppers Crossing 2 by 144-points.

The impressive performance was headlined by a remarkable 10-goal haul from second-gamer Darcy Phillips, while Cooper Atkinson and Jesse Corbett continue to excel.

Hoopers Crossing 1 notched their fourth game kicking over 25 goals this season, in their 169-point win over Werribee Districts 2.

The star forward has now kicked 36 goals from just 4 games, averaging an extraordinary 9 goals a game.

Lead by Ayden Murphy and Michael Camilleri (5 goals), the Saints’ 112-point total was their highest score this season.

Meanwhile the fifth placed Yarraville Seddon Eagles continued to keep within reaching distance of the top four, with a comprehensive 78-point away victory over the Sunshine Kangaroos, 13.16 (94) to 2.4 (16).

Seven goals between Ben Doll (4 goals) and Oscar Siddell (3 goals) along with a gutsy performance from Benjamin Ballard highlighted a dominant Eagles performance.

In the final game of the round, Flemington Juniors claimed their fourth victory of the season despite a scoreless first quarter against Point Cook, winning 8.8 (56) to 3.6 (24) on Sunday.