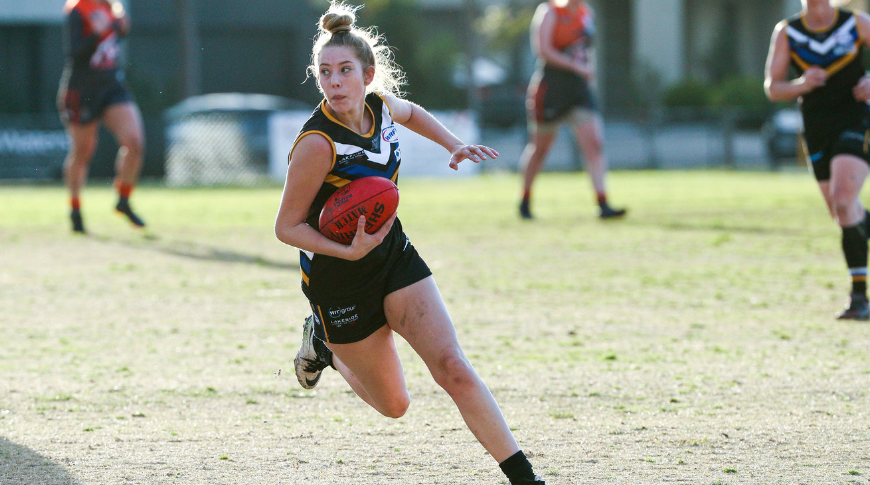 Caroline Springs has handed Manor Lakes their first loss in 21 games on Sunday, with the Lakers scoring a one-point win at Town Centre Oval.

The Lakers kept the visitors goalless in the first half, a rare feat, considering the Storm are one of the most attacking teams in the competition.

The Storm kicked the only two goals of the third term and headed into the main break leading by seven points, in what was a low scoring affair.

Momentum then swung in favour of Caroline Springs, who in-front of their home fans, kicked one goal, five behinds in the final term to record a one-point victory.

The Lakers remain undefeated in the Victoria University Polytechnic Senior Women’s season and sit in first place on the ladder. The Storm have slipped to third place.

Point Cook Centrals took out bragging rights over Point Cook in a Friday night game where the Sharks dominated the Bulldogs for most of the game.

The Bulldogs struggled to get the ball into their forward half, conceding five goals in the first three quarters and managing just two behinds.

In the final quarter, Point Cook finally started to hit the scoreboard and stop the Sharks scoring, but it was too little too late as the damage was done and Point Cook Centrals took the four points. Sharni Currie was impressive, as she kicked four of the Sharks’ five goals.

Spotswood proved too strong, defeating the Roadrunners by 160-points.

Yarraville Seddon have managed a considerable win over a struggling Tarneit outfit, as they kicked seven goals, and conceded just one goal in the first quarter – managing to keep them goalless for the rest of the match.

Caitlin Maher and Ann-Marie Geary kicked two goals each as the scoreboard pressure proved too much for Tarneit.

The win was the Eagles’ third of the season and their first at their home ground.

Laverton have held on to win by just four points, despite a strong start against West Footscray.

The Magpies held a three-goal lead at the final break, but after failing to score in the last quarter, the Roosters narrowed the margin significantly, which meant the final margin was much closer than the Magpies would have liked.

In the final game of the round, Werribee Centrals defeated Wyndhamvale by 195-points.

Samantha Kloet kicked six goals in the victory, she was one of 13 different goal kickers for Werribee Centrals.