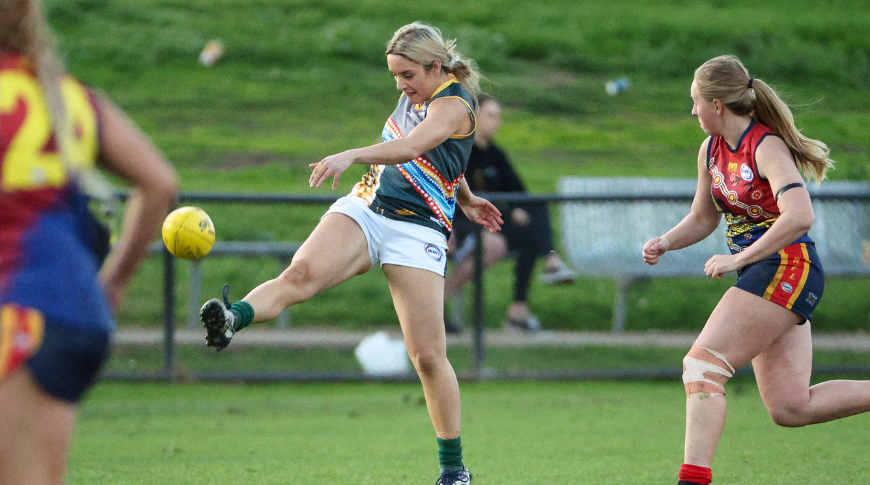 The Victoria University Polytechnic Senior Women’s competition is headed towards the pointy end of the season, with finals contenders working hard to lock in their position on their respective ladders.

The round kicked off with a Saturday morning hit-out between Caroline Springs and Manor Lakes, with the Lakers claiming an 84-point win over their Division 1 rivals.

Caitlin Pretty had an absolute field day in front of goals, kicking seven goals for Caroline Springs, while consistent performers Jaimi Paten and Yana Frontczak were the only Storm women to kick majors on the day.

The afternoon saw plenty of footy action for both divisions, with Yarraville Seddon hosting Werribee Centrals and West Footscray going head-to-head with Laverton.

The Eagles are keen to take a “big scalp” in the back end of the season, but will have to wait another week after going down to the Centurions by 48-points.

Paige Cook kicked a bag for the visitors, claiming five majors, whilst Hannah Lazzaro and Dani Menzies were strong under pressure for Yarraville Seddon.

Over at Shorten Reserve, the Roosters executed a strong team performance, scoring a 94-point win over Laverton. Eliza Terrey was instrumental out of the middle and Bec Douglass continued to lift her game for the home side — kicking 4 goals.

Despite the score differential, Mirae Holland and Abbey Brown repeatedly bought pressure to the contest for the Magpies.

Despite a valiant effort on home turf, the Roadrunners went down to the Lakers by 99-points. The visitors showcased eight individual goal kickers, including Shanae Peterson who registered 5 majors.

Madison Kromek kicked the only goal for North Sunshine, whilst Danni Holdsworth was strong in the ruck.

The Falcons took home the chocolates in the final game of the round, scoring a 58-point win over the Bulldogs out at Wyndhamvale Oval.