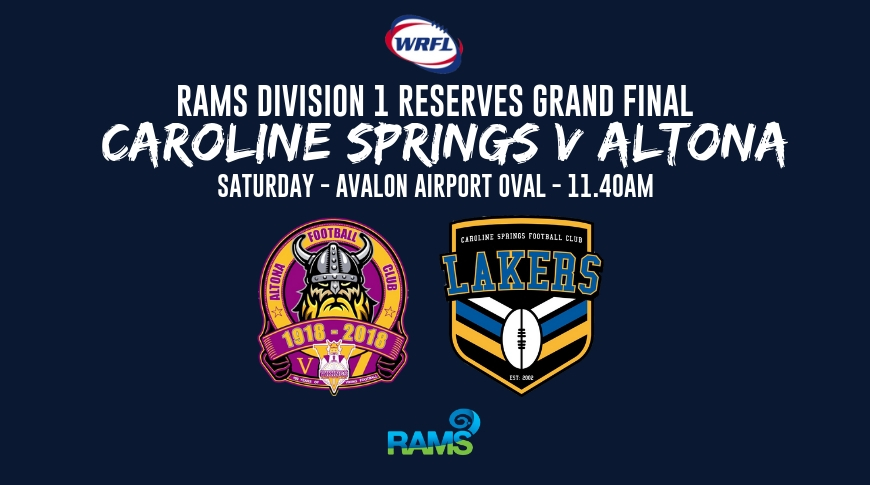 LAKERS AND VIKINGS READY TO RUMBLE

Altona and Caroline Springs will go head-to-head in the WRFL Division 1 Reserves Grand Final on Saturday.

In the three times they have met this season, the margin has been two points in favour of Caroline Springs, it was Altona by five points in Round 13 and just two weeks ago in the Second Semi Final, it was the Lakers by five points.

If any of these results are to go by, we are in for an exciting finish to the season.

For the Vikings, it is their second straight Grand Final appearance, while for the Lakers they will be playing-off in their first Premiership decider since moving into Division 1.

“Considering where we were last season and being only our second year in Div 1, we’ve probably over-achieved,” Caroline Springs coach Blake Richards said.

“Saying that, I’m proud of the attitude and work ethic of all the boys throughout the season which is the foundation of what we’re striving for, and if you get that right, you give yourself a chance every time.

“Now that we’re in the last dance, we’ll give it a red hot crack.”

Altona coach Ian Fox said his team has shown great stability over the course of the season.

“We have been fairly consistent over the course of the season losing one game in the home and away season,” he said.

“In saying that all four games against Deer Park and Caroline Springs came down to the wire which has carried through to the finals.

“After making the Grand Final last season, to back it up again has shown character.”

Richards said there is air of excitement at Town Centre Oval, with the Lakers ready for the challenge that awaits them on Saturday.

“It’s been a fantastic journey as a club thus far,” he said.

“We’re a young club that is looking to continually improve and this is a stepping stone in the right direction and in creating a successful culture.”

For Fox, his feelings were mixed after Altona’s senior side didn’t make it through to the final, going down to Hoppers Crossing by three points in the RAMS Division 1 Preliminary Final, however that sadness quickly changed to excitement and hope once his attention moved to the game at hand.

He said winning a flag in the club’s 100th year would be a great result for all those involved with the Altona Football Club.

“For me personally just helping to direct and lead the players to experience playing in a premiership will provide a great sense of satisfaction,” Fox said.

Richards, as a first year coach, said winning the Grand Final would be a chance to create some great memories.

Before the game, both coaches wanted to thank the volunteers, supporters and club officials for the ongoing support in 2018.

“As a club we have many volunteers giving up over 20 hours of their time each and every week to help our club not just survive, but prosper,” Fox said.

“To each and every one of them a heartfelt thanks. Hopefully we can bring them all something to celebrate.

Richards shared similar sentiments to those involved at Caroline Springs.

“Thanks to our trainers, who have been brilliant all season,” he said.

“My support crew, who have been by my side all year, make my job of coaching so much easier so thank you to all of them and of course to the club, who have shown faith in an untried coach like myself, and given me the opportunity to coach a great bunch of blokes.”