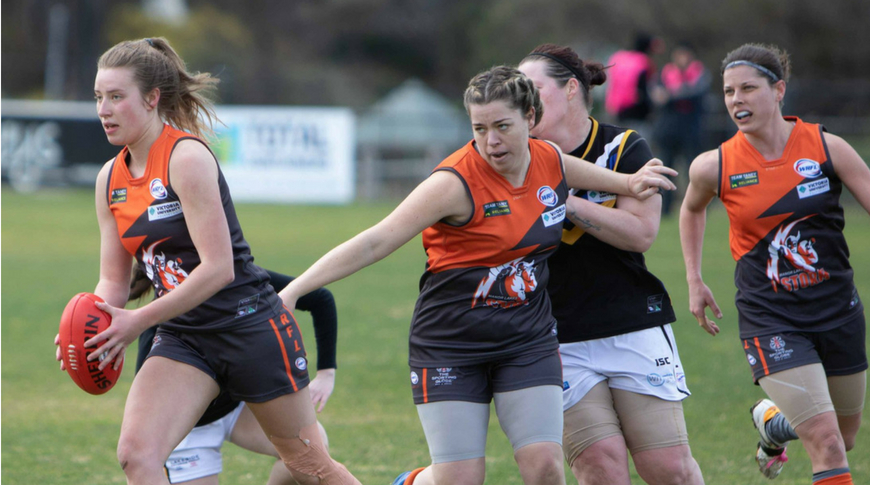 LAKERS AND SPOTTY TO MEET AGAIN

Caroline Springs and Spotswood will face off in a Preliminary Final next Saturday, as they aim to keep their season alive in the Victoria University Polytechnic Senior Women’s competition.

Spotswood had an impressive win against Laverton at Burbank Oval, while Manor Lakes got the job done convincingly against Caroline Springs and earned themselves a place in the Grand Final.

The Storm were strong from the first bounce, with some really strong defensive pressure not allowing the Lakers to score a goal the whole match, as they kicked nine of their own.

Madisson Ahumada and Gemma Anderson kicked three goals each for Manor Lakes, as Kellee McIntosh, Yana Frontczak and Mizz Barkes each scored one.

The Lakers struggled to contest and match it with the experienced Storm team, scoring just seven behinds for the match.

Manor Lakes continued to pile on the scores and cause damage as the ball very rarely wasn’t in their possession, keeping the game on their terms to get themselves into the big dance.

But it’s not over yet for Caroline Springs, with the second chance giving them one last shot at a Grand Final berth.

Spotswood have managed to get over the top of Laverton on Sunday, in what was a tightly contested game from the start, however Spotswood were just too good and had a number of good plays resulting in goals where the Magpies just couldn’t compete.

At the first break, it was one goal apiece, but in the second and final quarters, Spotswood were able to make the most of their opportunities and really make it difficult for Laverton to compete.

The Magpies didn’t score a goal for the rest of the game, and Spotswood took their chance to keep their finals hopes alive with five individual goal-kickers.

They will take on Caroline Springs at VU Whitten Oval on Saturday.