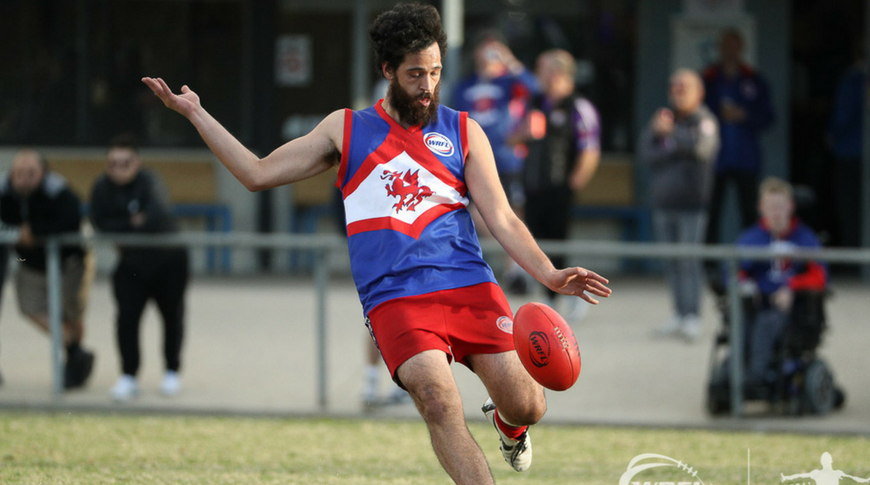 GRETO WINDS BACK THE CLOCK

Sunshine Heights put together an impressive performance against Laverton in front of their home crowd, battling against a tough Magpies effort and strong winds, before setting up a 44-point win.

The Dragons kicked with the wind in the first quarter and used it to get a flurry of inside-50 entries. Robbie Greto was looking ominous, with the Sunshine Heights forward line doing a great job causing turnovers and scoring opportunities with their pressure.

Going into the second quarter, Tom Long and the Magpies were unhappy with their “skill errors and discipline” costing them opportunities, as Laverton sought to step up their two-way running and get back into the contest. Only down by 10-points at the first change, and now kicking with the wind, Long and Jordan Cullen were ferocious around goal, helping Laverton get back on top. The Magpies’ intensity in the contest and tackling pressure held them in great stead, going into the main break ahead by 8-points.

The Dragons came out firing and determined to arrest control of the contest, with Ahmad El Sabsabi and James Ciarlo helping Sunshine Heights start to pile on the goals. While Cullen continued to battle for Laverton, Greto was unstoppable up forward, helping the Dragons kick seven-goals in the third quarter and hold a 30-point lead going into the last change. Greto continued to fire in the last, getting his seventh goal and helping the Dragons run away with a dominant win.

Elsewhere, Point Cook were impressive, with a 109-point win over Braybrook, with Liam Henderson and Michael Szulc among the best. Braybrook will look to rebound against Sunshine Heights next round, while Point Cook look to keep rolling against Glen Orden.

In Tarneit, the Titans recorded a 102-point win against North Sunshine, with Justin Ralph, Richard Psaila and Beau Bostock all kicking four goals. Tarneit go up against Wyndham Suns in what promises to be the match of the round in two weeks time, while North Sunshine will hope to get back on the winners list against Laverton.

Lastly, the Wyndham Suns were challenged, but ultimately got over a fighting Glen Orden by 20-points, with Rhys Kirk again starring up forward. Mitchell Post was immense for the Hawks in their brave loss.