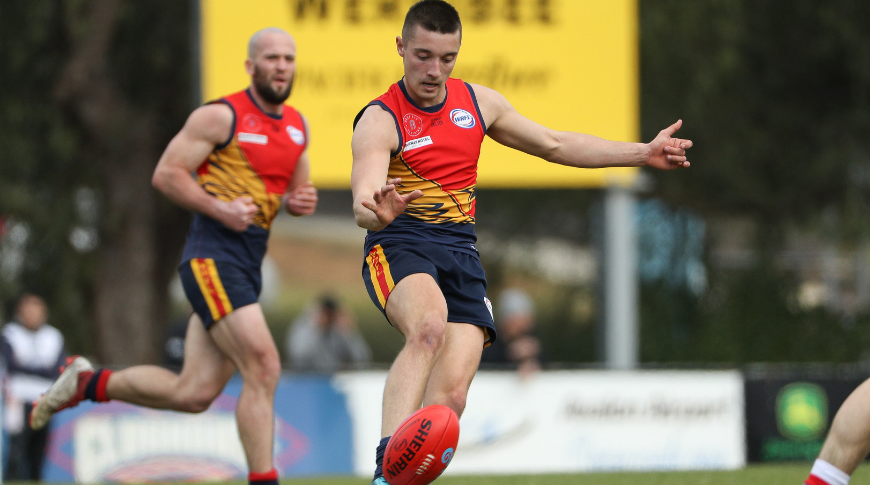 The Eagles and Centrals were nearly inseparable in the first half as the home side led by just one point after one before the score was tied at the half.

The big third term from last year’s grand finalists saw them take a 33-point lead into the final term which all but won the game.

Point Cook weren’t going down without a fight, however, booting five goals to one in the last but it wasn’t enough.

Nicholas Tsaloukis was best on ground and added a goal for good measure in the six-point win.

Despite the loss, the Centrals remain in the top four ahead of a Round Three matchup with Manor Lakes, while the Eagles will look to make it two on the bounce when they face Newport.

Jy Lambley’s four majors proved to be the difference as Wyndhamvale’s hot start continued as they ran out 28-point winners against Manor Lakes.

A six goal to one blitz in the opening term propelled the Falcons early but it was a four goal to one third quarter that sealed the win.

Daniel Smith and Jack Tessari added two majors each as they condemned the Storm to their second consecutive loss in the 11.9(75) to 7.5(47) win.

The Falcons will go for three straight wins when they battle North Footscray at home.

Newport held on for its first win of the season following their eight-point win against West Footscray.

Mahmoud El-Hawli kicked four majors in the 13.12(90) to 12.10(82) come from behind win while West Footscray’s Darcy McCallum added a game-high five goals in the losing effort.

West Footscray will look to get back to winning ways when they host Parkside in Round Three.

Parkside recovered from a 13-point half time deficit, kicking 11 goals to four in the second half to score a come from behind and win over North Footscray.

Brent Kelly continued his hot start by adding a competition high six goals while Jack Tate was best on for the home side who make it two wins from two in 2019.

James Waters was the only multiple goal kicker for North Footscray, booting five majors in the losing effort.