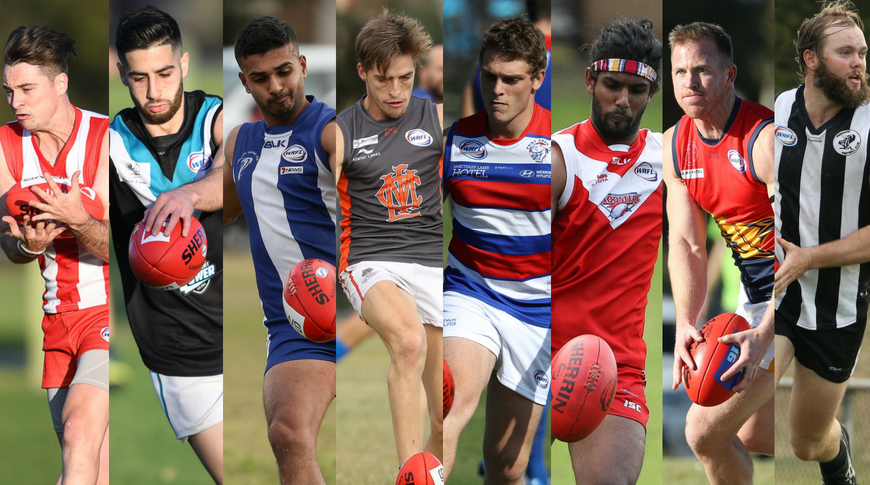 At the halfway point of the 2018 season, WRFL Media Manager Kristen Alebakis speaks with all the Division 2 coaches about how their club is tracking after nine games, what their goals are for the remainder of the year, plus all coaches rate their team’s efforts out of 10.

“We are placed in a good position being undefeated,” coach Vinnie Turcinovich said.

“Another side is also undefeated, so we need to make sure we are playing good footy when it comes to the pointy end of the season, because that’s when it matters.

“We want to get better.”

“I am happy with where we are at,” co-coach Chris Muratore said.

“We have come up from Division 3, we always knew that coming up would be a challenge. We have had a fair few injuries, but we are learning a lot, there is a lot of positives to take out of the year so far.

“If we win more games than we lose in the second half that would be good.”

“We are underperforming,” coach Jonathan Miller.

“We aren’t putting in four quarter games. I am yet to see our best footy.

“In the next nine games, I want to see consistency through four quarters and much better results.”

“We are struggling, I would be lying if I said we are going okay,” coach Matthew Stoodley said.

“We have had so many injuries, we are at the minimum number of players. We don’t have the talent in the two’s to help, but we are sticking together.

“We understand where we are at, but if any club has had the amount of injuries we have had, it would hurt them as well.

“We want to be much more competitive in the second half of the season. We are last at the moment, we are two games away from being safe.”

“We are improving every week,” coach Shane Lucas said.

“We are two games shy of where we should be, that’s our fault, but to come to the middle year having scored a 99-point win on the weekend, that is a good thing.

“We want to keep improving, we don’t want to be relegated.”

“We are sitting in a better position than what we thought we would be in,” coach Ian Denny said.

“We are happy with the first half, but we know it’s going to get a bit harder from here.

“We need to maintain our healthy list and hopefully and build on what we have achieved so far. We have had an influx of new players this season, so hopefully we can stay in front.”

“We are probably where we thought we would be, we have been competitive,” coach Ziggy Kadour said.

“We have had four wins and five losses, we have been competitive on occasions and other occasions we haven’t.

“(In the second half of the year, we want to) lose the margin on the better teams, a few more wins would be nice and if that sees us finish in the four that would be great. Hopefully we play finals.”

“It hasn’t been a disappointing start to the season, more frustrating than anything,” president Shane White said.

“Losing three key players for the year through injury plus another four who have only played a few games and yet to come back has made us constantly dig deep into our playing list.

“Inaccurate kicking has also made the first half of the year disappointing, that’s cost us at times.

“The second half of the year we will be still striving for finals.”